Jordan 3 Retro Blue Cement Is Hype: DJ Khaled, You in on This?!

Before we talk about the Jordan 3 Retro Blue Cement, we want to do a short bot success recap in your honor. So, Jordan 6 Hare all-region Nike checkouts were dominated by our bot only yesterday. And since we wouldn’t want curiosity to kill you on the inside, we’re straight up telling you that Orange Camo was explosive. EU, AU, and NZ regions were covered. In what our bot’s made of. The point is, if it’s a Nike release or restock, we’re consistent as it gets. Last week was a Mexican buffet because the results were down right dynamite. We copped the Jordan 1 Tie Dye for our goddesses. And secured the Jordan 5 Top 3. For our Model 5 worshippers.

Ready to Cop Some Jordans?

But June’s not over yet. The highly anticipated Air Jordan Zoom is dropping on the 20th. Along with the P(HER)SPECTIVE duo! But getting all up about our success is pointless without actually copping the next best thing. Check out our list of Women Jordans dropping this year to do just that.

Ready for next week's Poop 💩 pic.twitter.com/FHIM2cSmdj

Jordan 3 Retro Blue Cement, Who Are You? 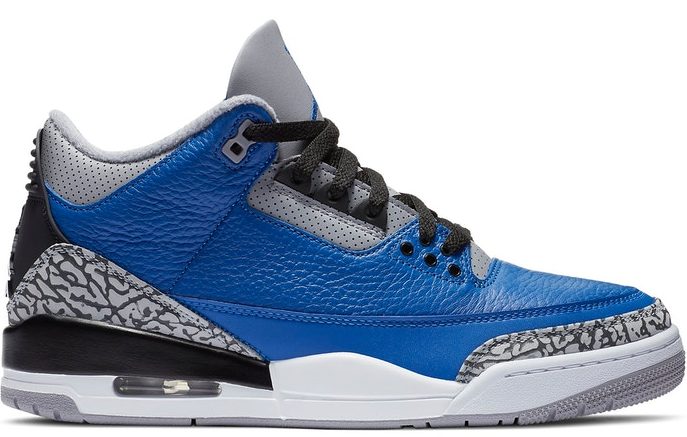 Model 3 has been scratching up the walls. With the Animal Instinct Pack. In December 2019, Animal Instinct 1.0 dropped in a furry mammal exterior. And recently on June 6, Animal Instinct 2.0 owned the scaly reptile extreme. Looks like we’re out of the jungle now and back on the throne with the Jordan 3 Retro Blue Cement!

Jordan 1 Royal copycat recipe or DJ Khaled in the mix?! The AJ1 Royal Blue OG took flight in September 1985. And the colorway has received countless Retros over the years. One of which recently dropped as Royal Toe in May. Cement grey underlays and a Varsity Blue exterior identify this sneaker. Along with the iconic elephant-print outline on the toe and heel areas! Basically the brother from another mother of the Jordan 3 Retro DJ Khaled Father of Asahd. Which dropped in 2018. And is reselling in the $20,000 range on GOAT! That’s four zeros, you counted right.

Cop the Blue Elephant for Some Greens!

So, this blue boy merges the finesse of the Jordan 1 Royal Blue colorway and the hype of the AJ3 White Cement! Which is, we might as well mention, on the list of must-own Jordan Retros. 3 out of 5 on that list being classic bred colorways. Bet you didn’t know that. The Jordan 3 Retro Blue Cement is expected to drop on June 26. And is reselling in the $600-800 range on GOAT. Which is pretty decent. For a classic Retro without a collaborative push! Did we mention it only retails for $190? So you know where your money is going that day. And with a guaranteed flip like that, all you gotta do is cop some blue elephants. With the best Nike bot in the market.