The Air Jordan 4 Metallic Pack first introduced its court purple member. To warm us up for the electric  circuit. Makes sense since Jordan has been hyping on purple ever since the Sheila Rashid collab. So much that it released the AJ1 High in Court Purple on April 4! The Metallic Pack will release soon in Court Purple, University Red, Team Orange, and Pine Green colorways! Other anticipated AJ4 releases include Rasta and Drake’s expected OVO Splatter in Jordan’s signature bred. Which is among the top popular colorways of the top Jordan Retros. There’s nothing like it. Except maybe the wolf of basketball street, the Air Dior collab! So far, the purple, red, and orange variations of the metallic pack have been revealed by DJ Khaled! 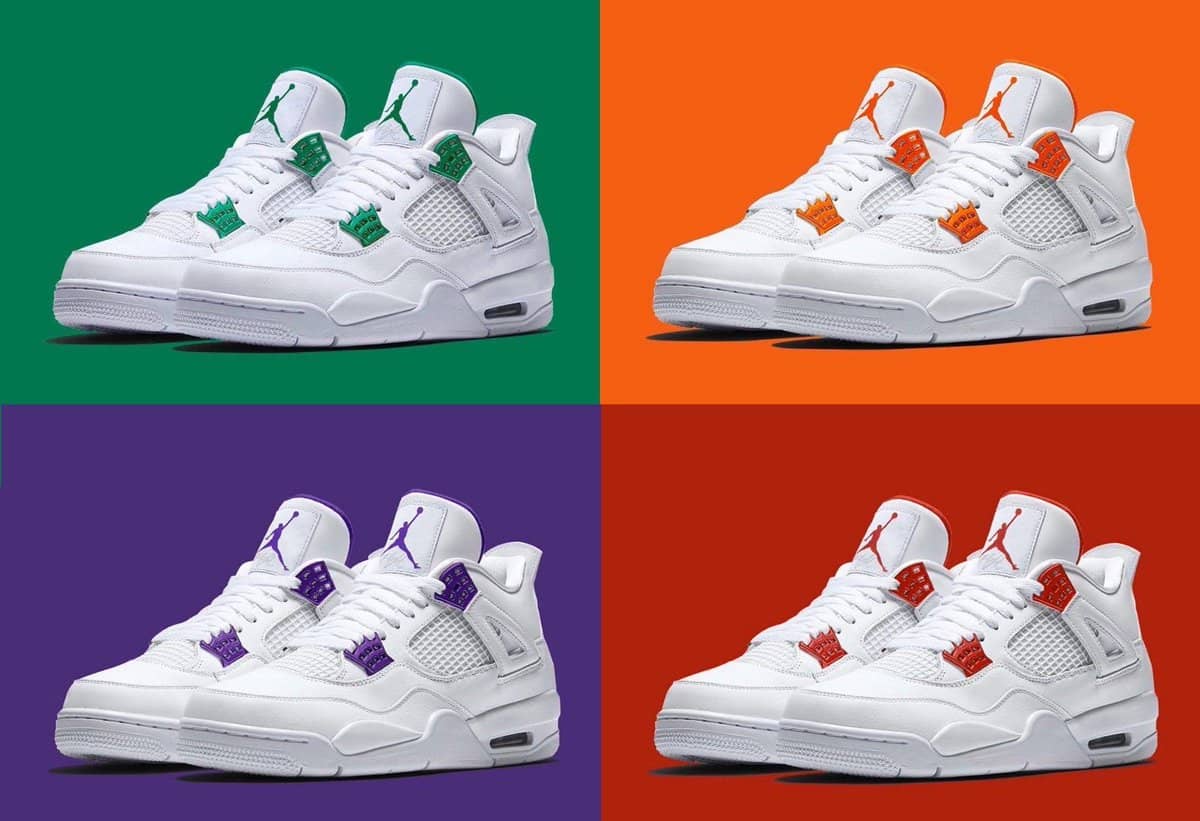 The four AJ4s feature a white leather base and colorless nets on the throat and sides. Metallic detailing accents the upper and lower eyelets. In the designated colorways! Like cage-designed metallic charms.

The designated colorways also cover the Jumpman on the tongue and heel, the inner tongue, and the airbag. So that’s four other parts. Man, Jordan designers keep it real tight when it comes to finishing touches that resonate their missions!

Now that we covered the descriptions, time to talk reminders!

The Air Jordan 4 Metallic Court Purple, as mentioned, brings back the AJ1 High Court Purple. Which riled up on success rates with TSB!

The Air Jordan 4 Metallic University Red has the raging flame reaction of the AJ5 Fire Red releasing on April 25!

The Air Jordan 4 Metallic Team Orange is what the ripple effect of the Nike Dunk Syracuse must be like! It was released on March 14 in tribute to its 1985 True to Your School college pack! Which explains the likely motif behind “team orange.” And it also scored awesome copping points with TSB!

The Air Jordan 4 Metallic Pine Green brings back the AJ1 High Pine Green. Same as with court purple. Which cashed up on green luck with TSB!

The Air Jordan 4 Metallic Pack is rumored to release on May 16, 2020 on Nike.com and select retailers at a retail price of $190 each.

The Air Jordan 4 Metallic Team Orange will release @atmos_tokyo on May 5 and globally on May 30.
The rest of the Metallic Pack is pushed back to May 20 instead of 16.

So far, the resale value of the Metallic Court Purple is an average $350 on GOAT. The hype train will pick up this pack in a couple weeks. With each of the 4 colorways holding special meaning to Nike and Jordan fans, TSB is here to stock you up fam! With an approximate $160 resale profit before their release in 2020, think about what this pack will be worth on AJ4’s 40th anniversary! Or the big 4-0 to get the Jordan team excited. The best Nike bot will prep you for such an occasion! Also keep up with the most anticipated Nike SB Dunk and Nike FoG 1 sneaker releases!