Jordan 1 Snakeskin, Harry Potter Is That You, Fam?!

All slither the bravest of the brave, the Jordan 1 silhouette! Just when you think you’ve seen the last of them crazy 1985 genes, the boldness jumps back right at you. When you go banned you never come back, right? But we lovin’ the rainbow dip! From the cloudy pastels of the P(HER)SPECTIVE sneakers to the tipsy wave Tie Dye Jordan. As well as Shady McShaderson, AKA the Jordan 1 Smoke Grey. Not that the Metallic Neutral Grey is any less shady. We get that with everything going on the world, we’re stuck in a grey area. But Air Jordan may be stretching it a bit. Emotion is good, healthy for them pores. The Jordan 1 Zoom in green is what we’re talking about. Whether it was raging or “zenning”, it was sure present. But it’s time to address House Slytherin! We’d sure as hell wear the sorting hat as a wig if it gets to go with this Jordan 1 Snakeskin. Best Jordan 1 colorway of the year? You know it.

We ain’t sure if you heard about our Jordan detox. Last week, TSB took the time to look within Nike without the Jordan “YouCompleteMe” part. And we compiled a list of Nike sneakers worth the cop! Even our bot took it seriously. Follow us on Twitter and our blog to keep updated on killer Nikes. [Winning an official copy means having a go at the Jordan 1 Snakeskin and plenty more! Better try your luck]

4X MORE CHECKOUTS than we've had on the first drop📈

Shit is IMPROVING with every release thanks to our CONSISTENT UPDATES 💩 pic.twitter.com/3uO7wEAtXG

Not saying we’re Harry Potter but would you look at the colorway on this Jordan 1 Snakeskin?! An inverse of last year’s Jordan 1 Satin Black Toe, reselling in the $400-500 range on GOAT. And a Jordan Chicago-inspired colorway! And this ain’t no Jordan Retro. It’s an OG, the first of its slithering kind. Although red, black, and white have been used liberally by the Jordan team over the past 35 years, the snake detail is a game-changer. Instead of settling for a color reversal Retro version, a snakeskin texture dominates the heel area in black. So, it’s like Chicago in the front and “Ima bite you” in the back. Reminds us of the wet reptile feel of the Jordan 3 Animal Instinct 2.0. 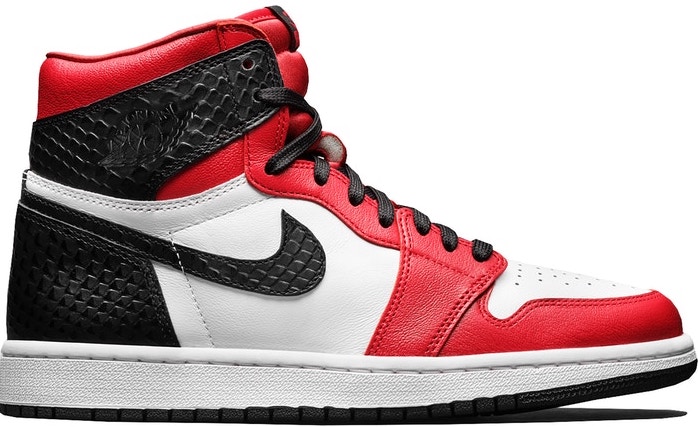