Is there an Air Dior pandemic we should know about?! Because the Air Jordan Zoom in Racer Blue was a legit knockoff in theory. At least its first impression was. And now, the Jordan 1 Smoke Grey is second-handling the situation. The Air Jordan 1 design team is going about and beyond with color schemes this year. The Jordan 1 Tie Dye and P(HER)SPECTIVE speak for themselves. Also did you know that 9 of the top Jordan colorways this year are exclusively Women’s? She got spirit and now she’s got sole! But before we get off track, you gotta know that it’s all in that Wolf Grey appeal. Racer Blue had a hint of it, Smoke Grey is popping it, and Air Dior is owning it. And yet a mashup of classic bred and Air Dior highness? Beat you to the best Jordan 1 colorways of 2020!

The Shit Bot is dominating all-region Nike and Jordan releases. A consistent case of explosive diarrhea. We went there! And when success makes us proud, we like to make you happy. With giveaways that double prove that we’re in this with you for real! You don’t just stumble upon consistency like that anywhere in the market.

Jordan 1 Smoke Grey: Not So Shady on Resale!

Think of the newly released Jordan 1 Mid Smoke Grey and double the hype. Because not only does the Jordan 1 Smoke Grey High compete the leather norm with suede. But it’s got battle scars! The ankle flap be owning that Varsity Red like it’s 1985. With the Jordan wings on the lateral side to double own the symbolic bred combination. It’s got a white leather base, wolf grey suede overlays, and a Jordan victory scarf wrapped around its collar! Some edgy must-have shit right there. What’s a Jordan sneaker collection without some fictional heroic spice?! These brave boys are already reselling for over $350 on average. Expect the copping battle to commence on July 11 for a retail price of $170. Ready to charge? 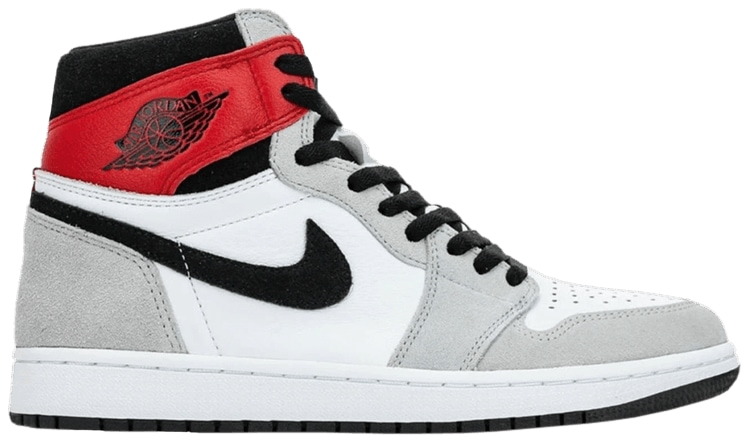