In a couple of days, we’re giving up our OOS shield and dropping shit bombs on Nike sneakerheads with an exclusive TSB restock on Black Friday 2020. How’s that for consistent gratification? On the biggest shopping day of the year, The Shit Bot will load you up with official copies to tend to your Swoosh-aholic needs. The best Nike shoes sure as hell ain’t buying themselves on retail, so we want to make sure that you do! As the only working Nike bot, it’s our job to crank up your game in time for the Holidays. So, if you’ve been keeping up with our success @The_Shit_Bot and want a chunk of this mud pie, you know where you’ll be on the 27th.

Want to Make It Big as a Nike Reseller?

With nearly $5M in overall user profit and roughly 80K checkouts since January 2020, you can see why TSB is worthy of your goals and expectations. Our regular updates and 24/7 support team maintain our performance at a 96% success rate. Meaning, we consecutively cop 92/95 Nike releases. How’s that for a test score?! From Jordans to Nike SB Dunks and many more, TSB has got your back. You can go ahead and plan out the next year of your sneaker career right now, pal. Just make sure you pin that fancy tale on next Friday first to have a shot at copping the best Nike shoes on the market.

Still need a push in the right direction? Check out the best Nike shoes TSB copped in 2020! It’s the legit cure to overthinking. 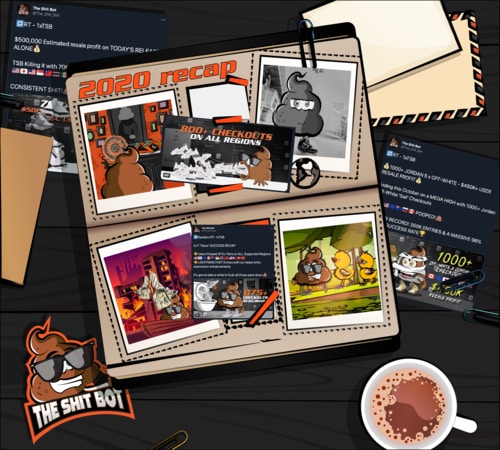 Although we’ve nailed many Jordan and Nike releases throughout 2020, we’re looking at the big money-makers now. A few hundred pairs copped is a sweet deal, but we want to pump it up with the super hyped deals we closed this year. We’re interested in talking about success stories that have made our users over $100K in overall profit. We ain’t here to push peanuts out of their shells!

Our first top mention is a Nike Zoom x Stussy collaboration. The July release was reselling for at least $250 when our user base copped over 800 pairs. Which sets the overall user profit for this release at a MINIMUM of $200K easy.

One of our greatest hits in August 2020 was the Jordan 1 Silver. The hype around its return from its 2001 Japanese roots was massive. Let alone the fact that it dropped with its own special briefcase. The pair alone is still reselling for $300 on average on GOAT. Which marks our user profit no less than $250K.

It's gonna take a while to flush all those pairs down💩 pic.twitter.com/cDsfDg6fii

Although September 2020 was one heck of a TSB ride, the winning post of the month is our fragment x Jordan domination. Reselling at an average $350 nearly two months later, this “elephant-less” Jordan creation crushed it. It was worth $2,000 before it dropped and we copped over 700 pairs of this limited edition. We’re talking $500K in user profit on a rainy day, fam.

TSB Killing it with 700+ Fragment X Jordan checkouts on 🇺🇸🇯🇵🇲🇾🇸🇬🇹🇼🇹🇭🇲🇽

It’s safe to say that October has been our top-performing month of the year, YET! November is not over yet and we’re prepping a powerhouse for the Holidays. With over 1,340 checkouts on the super hyped Off White Air Rubber Dunks, we made nearly half a million dollars in user profit in a SINGLE day!

You know the buzz around Off White Jordans and we’re proud to say we copped over 1,000 pairs of the Off White Jordan 5 Sail! Virgil Abloh collaborations are used to long-term hype and this sailor is valued at a decent $600. Which actually means that if our users spice up their deals on resale and own up to the value they’re offering, they can make well over $450K. We’re talking about over half a million dollars if they sell it right.

Frankly, this success post is a top score in TSB history. A combined force of over 8,000 checkouts on the Jordan 1 Familia and Slam Jam Dunks. The Jordan 1 “Die de Muertos” was valued at $300 on average on its release date. And the black Slam Jam Dunk was a flip-worthy $475 deal. Our happy-to-be-shit users sealed October with over $1.5M in profit.

So far in November, we’ve got two success stories that rocked every TSB copper to a deep sleep. TSB secured over 3,000 Jordan 1 CO.JP Midnight Navy pairs with at least $270K in user profit. As the second Japan-inspired win,  worth mentioning, TSB dominated a hot stock on this one. Our second worldwide November poop includes more than one hyped release. Leading the list, we’ve got the Nike Dunk Ceramic with over 1,200 checkouts. And we’ve also got a 2,300 checkout combo for both the Jordan 1 Mid Purple and the Air Max 1 Anniversary Orange. This 4,500+ checkout on 3 Nike pairs brought in about $420K in user profit.

THIS IS HOW THE #1 NKE BOT RUNS THIS SHIT!💯 pic.twitter.com/nGumsNJqtu

Whatcha Gonna Do When They Come for You?!

Whether you’re a Nike fan or a sneaker reseller (or hoarder!), this is your only chance to cop with a kickass Nike bot without having to sell your soul for an OOS bot on resale. This will most likely be our final act of kindness in 2020, meaning no restocks after this one before the year is over. Sure you can hang around on Twitter and give our frequent prizes and giveaways a shot. But fam, we both know it ain’t the same as scoring fair game TSB copies.