It’s like Nike hits resellers from one side, then offer them candy from the other. The Swoosh made it its job to target resellers back in 2022. News from that year is more toxic than most of the Kardashians’ love relationships. But this year it’s like the brand made some resolutions. Ceasing fire on resellers seems to be one of them. Until now, at least. But life’s short y’know. We gotta look at the bright side, or more like, at the dope releases we’ve been getting. Latest of them being Nike Tom Sachs Brown. So, let’s check these kicks out. But in case you’re more into flashy things, St. John’s Dunks are the it sneakers for you!

If you know anything about this collab, you must know that lowkey is their forte. Nike x Tom Sachs collab is all about undermining shit in a genius way that now every sneaker they drop gets plenty of value. Value as in sky-high resale price. So, if you take a look at them kicks, they most probably won’t appeal to you upon a first glance. As you might think they don’t really fall within the trendy category . So, you have to make one of two choices. Inspect Tom Sachs Brown kicks more. Read about the collab, so you know all the special values it holds. In case you still gagged, you can move on to the second choice, which is seeing how much reselling the kicks can make you.

So, how does this Tom Sachs x NikeCraft General Purpose Shoe Brown look like?  Well, for starters, it doesn’t look much different than previous drops. Brown Tom Sachs will feature an almost-all-brown build, which overlays the three different shoe materials: mesh, leather, and suede. Now that we think of it, it does give that trashy vibe ISPA Mindbody gives, especially with that mesh thing. 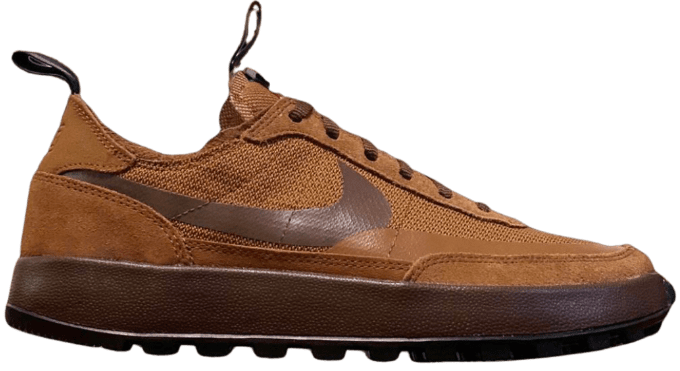 Nike Tom Sachs Brown is gonna drop on February 5, 2023. It’ll retail for the usual $110. And considering its resale value, this pair makes a great deal. It’s now reselling for a minimum of $433 on GOAT, and a maximum of $805! So, if not for the flex, y’all should definitely try out your copping skills for the flip. And in case you know shit about copping, we’re here to be your shittiest guide!

How Can You Score Them Kicks?

You know what Nike SNKRS drops are? They’re one heck of a tough cookie that will introduce you to more consistent Ls than you’ve ever encountered throughout your whole life. But once you know what a powerful Nike bot, like TSB, is the tables will turn. All you gotta pay is $300/Year and you’ll have access to The Shit Bot which supports 50+ regions worldwide!

This way you’ll be taking a step towards being a certified sneakerhead. Thing is, you need a couple more things to go with your bot. One, you gotta get yourself some great proxies. Two, you’ll need to find Nike account providers. After you do that, make sure you’re connected to a good server and you’ll be good to go. Good luck peeps!