Jordan 11 Low Concord Drops Only for Women Before the Bred Colorway!

Michael Jordan first wore the OG Jordan 11 Concord to Game 1 of the 1995 NBA Eastern Conference Semifinals. And although he switched from the 45 to the 23 jersey for Game 2, he also wore the shiny black stripe to it! And was fined $5,000 for wearing the Concord! Ring any “Banned” bells fam? Back then they even described it as “white shoes with a strip of black patent leather around the base.” The Defining Moments Pack dropped the AJ6 & AJ11 in 2006. With the DMP Concord reselling for over $500 on GOAT and sale prices increasing by 40% on StockX! But how big of a deal will this year’s Jordan 11 Low Concord be if it’s only available in women’s sizes? Then again, Nike Hoops and AJ5 Fire Red dropping this weekend might cushion the blow on the male ego! Since girl power’s been relentless in the Jordan game with Sheila Rashid and Melody Ehsani so far in 2020.

Unlike its 1995 OG High, this women’s exclusive Jordan 11 Low Concord has adopted a low cut instead. And shows off its concord patent leather overlays in a more vivid hue of blue. Rather than the traditional black shine underneath the white upper. And an icy blue outsole completes the 2020 Retro just in time for the summertime chill pill! The closest we got to this Retro was the AJ11 Low Navy Snakeskin in 2019. Which you can buy right now for below retail on GOAT. And if you’re into that snakeskin kink, you might want to cop the Jordan 1 Low Multi Snakeskin dropping this weekend on the 1st. For only $110!
The Jordan 11 Low Concord WMNS will drop on May 22 on Nike.com for a retail price of $185. 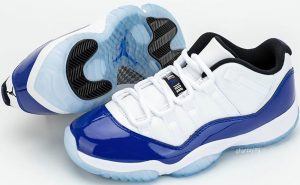 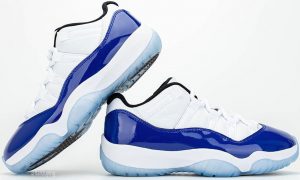 Cop Concord and Wait till the Next Day!

The brighter take on this women’s version is gonna have summer 2020 talking! With the AJ11 Concord making its way through 95 with a banned reputation of its own. AJ11 Bred that crushed the final Jordan cop in 2019 is also coming back with the Jordan 11 Low Concord Bred. And only two days after Concord! Looks like another twin case in the Jordan line. And for these Chicago Bulls legends to have a storage spot in your Jordan collection, you’re gonna need the best Nike bot for some consistent copping two days in a row! Make sure you also check out the best Jordan 1 colorways for this year to cop all the styles you can get!