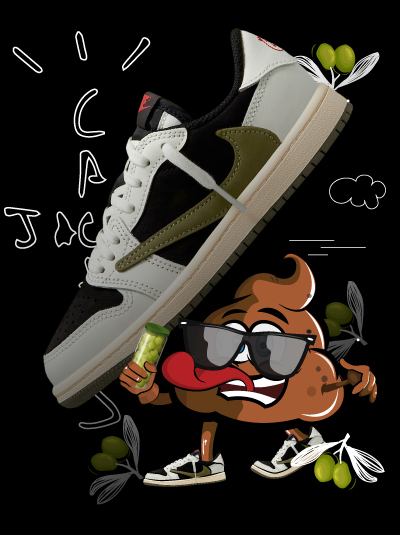 Rumors, rumors… Everything was just “rumors” up till now! And let’s say that them whispers got us afraid of raising our hopes up in fear of being let down. But y’all must know, disappointment is taboo when it comes to the Cactus Jack x Nike collab! For months now, all we’ve been hearing about is a possible Travis Scott x Jordan 1 drop. And a Travis Scott Olive Jordan 1 is exactly what we all are getting! Why are we bouncing off the walls with this news you ask? Well, there’s just something special about Cactus Jack collabs. Whatever Scott drops, that shit sells and resells for tons of money. And who doesn’t want in on such a thing? Now before we hop into more deets, make sure you break into the industry with the right lingo yo!

Always keep in mind that the whole sneaker world’s secret lies in learning sneaker-copping tactics from the right source. For now, let’s see what the upcoming kicks are all about before y’all lose your shit.

You’re here ‘cause you’re a Travis Scott sneakers collector? Or maybe, you’ve taken so many Ls on previous releases but you ain’t one to lose hope? We know the struggle fam. And most importantly, we know how shitty Nike SNKRS drops can get. But being the hottest sneaker of 2023, Travis Scott Olive Jordan 1 sure deserves all the hassle. Who knows, after all, these new Travis Scott Jordans might be the breakthrough y’all been waiting for.

So the new women’s exclusive Travis  Scott Jordan 1 will feature a black suede upper base with off-white leather overlays. Quite the contrast, but color-blocking just hits different y’know. But this ain’t all. We still got the color the name of the kicks holds after all. Medium Olive covers the oversized reversed Swooshes, outsoles, and laces. Midsoles will come covered in sail, aged-like midsoles.  And finally, a hit of red on the tongue labels and Travis Scott logos on the heels make the kicks pop out even more. A perfect fit for Spring 2023!

The new Travis Scott Olive Jordan 1 is probably gonna drop on March 25, 2023. We’re saying “probably” a lot these days ‘cause of them supply chain issues. You never know what surprises that shit brings the industry. Anyway, these kicks will retail for $150. Y’all must note that copping for retail is always the way to go. Especially with Travis Scott’s collabs. Unless you’re down to pay a couple of grand for a pair of sneakers that is! Although we still got no resale value for these babies, we can expect that thing to go sky-high. Since the Reverse Mochas are now reselling for $1,195 on average! While the Black Phantoms now resell for an average of $732. And let’s not forget about Jordan 1 Mocha which overshadows both of the above-mentioned kicks with its $1,779 resale value.

How To Catch The Travis Scott Olive Jordan 1 Release?

If you’ve been checking out our blog more often, y’all must know the drill by now. All in all, you definitely need a powerful sneaker bot for Cactus Jack’s collabs. But if they’re dropping on Nike SNKRS, like the upcoming Travis Scott Jordan 1 Olive, then you’ll need one heck of a Nike bot! And you’re one lucky soul to find a powerful, yet affordable, Nike bot like TSB in stock. Jordan 1 Reverse Mocha’s success just proves that you scoring them kicks ain’t a dream. All you gotta pay is $300/ year and you’ll be able to cop from 50+ regions worldwide! However, you gotta make sure you hook your bot with the right proxies and Nike accounts, all while connected to a blazing server! Good luck fam!