Skateboarding rolled its way into American street culture from sweet California in the 1950s. When waveless surfers would unscrew the wheels of their roller skates and attach them to wooden planks to prevent surfing withdrawal. Canvas shoes with rubber soles supported by brands like Keds and Converse were popularly worn at the time as skate shoes. Up until Vans was founded in 1966 and took over the SB scene with its double-stitched canvas and grippy waffle outsoles. The sneaker brand had skaters obsessed with its free skater identity and ideal footwear. Till Alan Gelfand cracked the world’s first Ollie in 1978 and sparked skate shoe innovations in the 1980s. With famous skater Tony Hawk at the heart of skate shoes brand sponsorships. 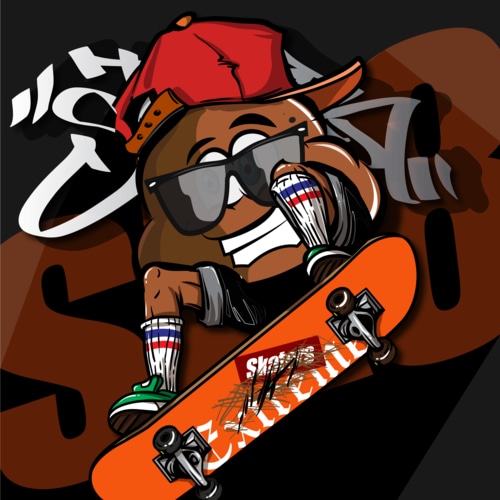 Vans is the world’s OG skateboarding sneaker brand and it dominated the streetwear scene for about ten years. Before Tony Hawk and other pro skaters turned the spotlight of invention toward the fun sport in the late eighties. Which FYI was also a time when the Air Jordan 1 was popular for its skateability. So, what really happened to skate shoes during the eighties? And what made skateboarding “come out”  after 1999? 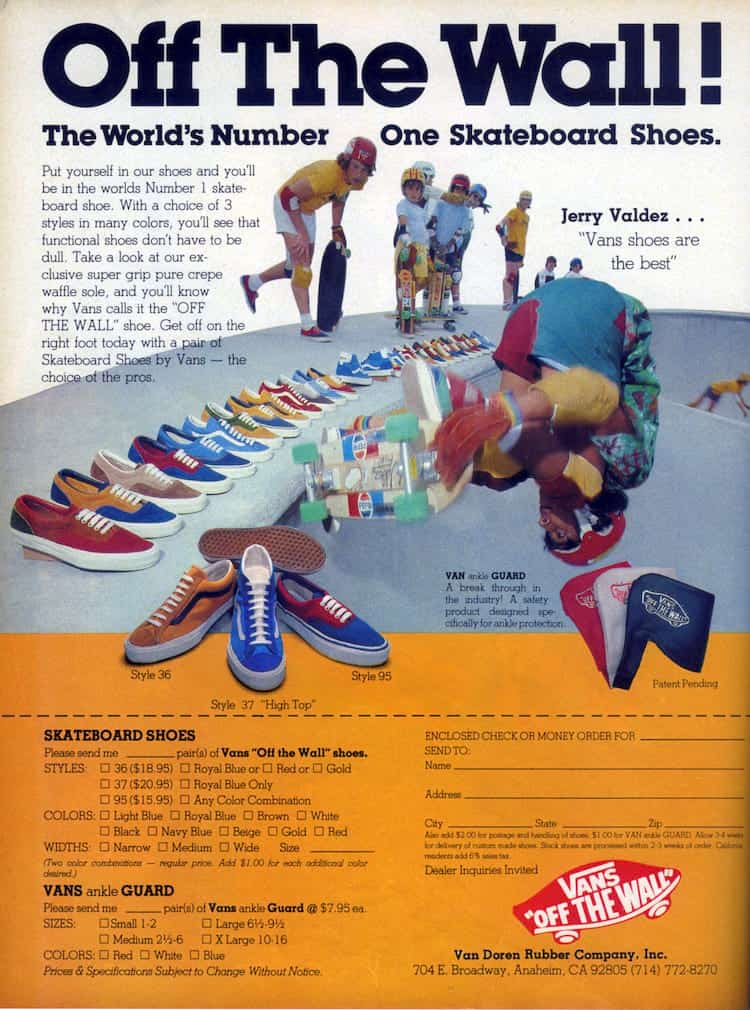 In the fifties, it was about Keds and Converse: canvas shoe structures with thin rubber outsoles. Not that these lifestyle brands aren’t timeless in the industry but the four-wheeled adventure cracks and tears them easily. Although comfortable, they are not long-term nor are they sturdy enough to support skaters. 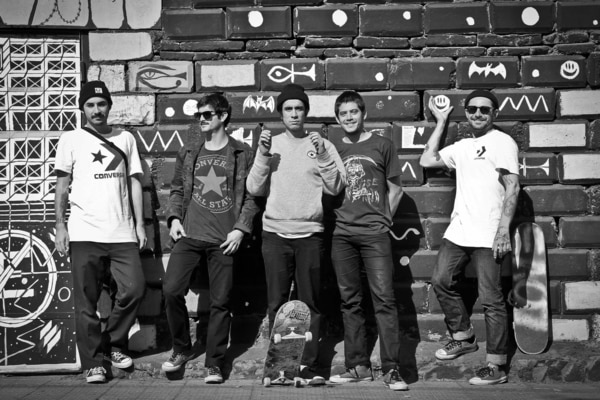 In the sixties and seventies, a major skate shoe upgrade was founded by Vans. But do you know what made the brand rise to the challenge in 1966? It was the first skateboarding shoe invented by the Randolph Rubber Company in 1965! The Van Doren bros decided to blow past the Randy 720 with #1 skate shoes. And boy did they succeed.

As trendy as Vans sneakers are in streetwear fashion, they are manufactured especially for skaters. The trick is mainly in the soles. They consist of vulcanized rubber and are wide and padded enough to withstand the pressures and stunts of skating. And since canvas is cheaper than leather and more comfortable than suede, Vans upgraded that too. With double-stitched canvas that lives up to skaters’ expectations. Along with all the twists and turns. 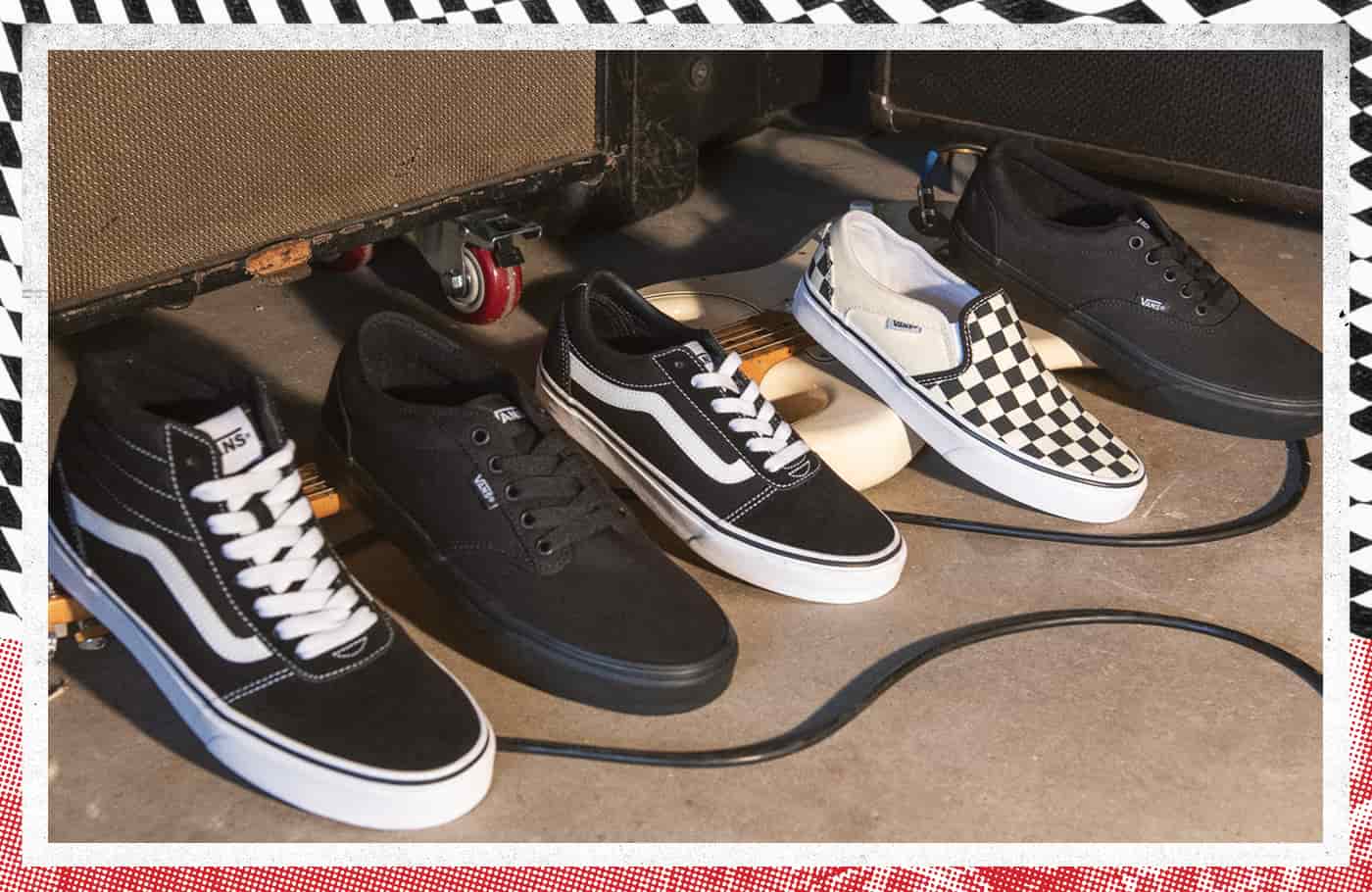 In the eighties, Air Jordan 1 and Airwalk entered the game. Founded in 1986 and inspired by the first Air Jordan model, Airwalk is a classic skate shoe brand that most of today’s youngsters haven’t heard of. It was the first shoe company ever to pay pro skaters like Tony Hawk to market their shoes. Which means it recognized the hype of the sport and its players early in the game. And took a never-before-seen initiative to leave its mark in the industry. Tony Hawk even said: “nobody was making money, so to get free shoes was huge.” 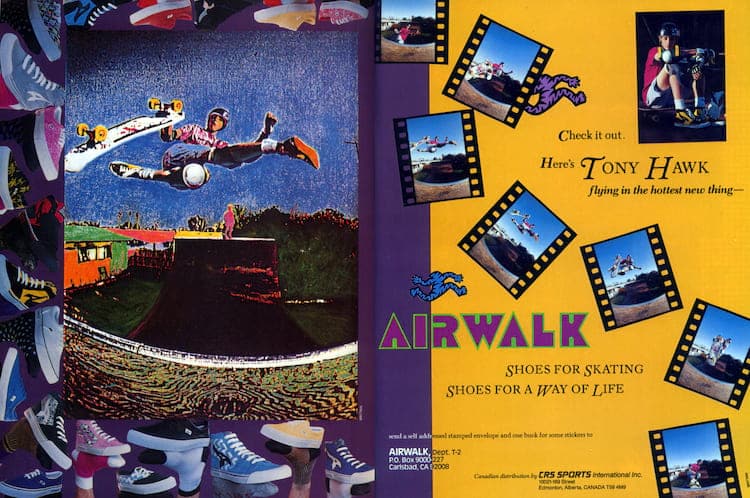 Pro skaters and skater wannabes lived underground when popular sports like basketball, football, and baseball blasted the sneaker news scene. Until the Tony Hawk Pro Skater flooded the market in 1999 and brought along a new appreciation for skateboarding culture.

Before the popular PlayStation game took over the nineties generation, skate shoes were a super complicated footwear choice. They were only made by skate brands and sold at skate shops to skaters. And since the popularity of the sport hadn’t opened up commercially yet, brands “overdid” it with skate shoes. Meaning, they illustrated the sport’s juvenile, J-puffing stereotype onto the sneakers. Without investing real technologies to make them functional. It was all for show and advertisement: the fat tongues, stash pockets, and rubber lace loops.

Till Nike SB Dunk crashed the market in March 2002 and redefined skateboarding as a sport and sneaker niche. The world never saw it coming but soul skaters dreamt about it every day.

There is no beginning to describe what Nike SB Dunks mean to the skateboarding community and sneakerheads in general. Let alone the sneaker resale stage. Heck, even your outdated parents have a clue or two about the OG Nike Dunks that dropped in the eighties. High and Low Dunks have been huge in the sneaker game. With their Air Jordan 1 manifestation and pure Nike identity. But it turned out that Dunk was waiting for 2002 to fully blast with hype! With its SB model feature soaking up on dope collaborations and designs. 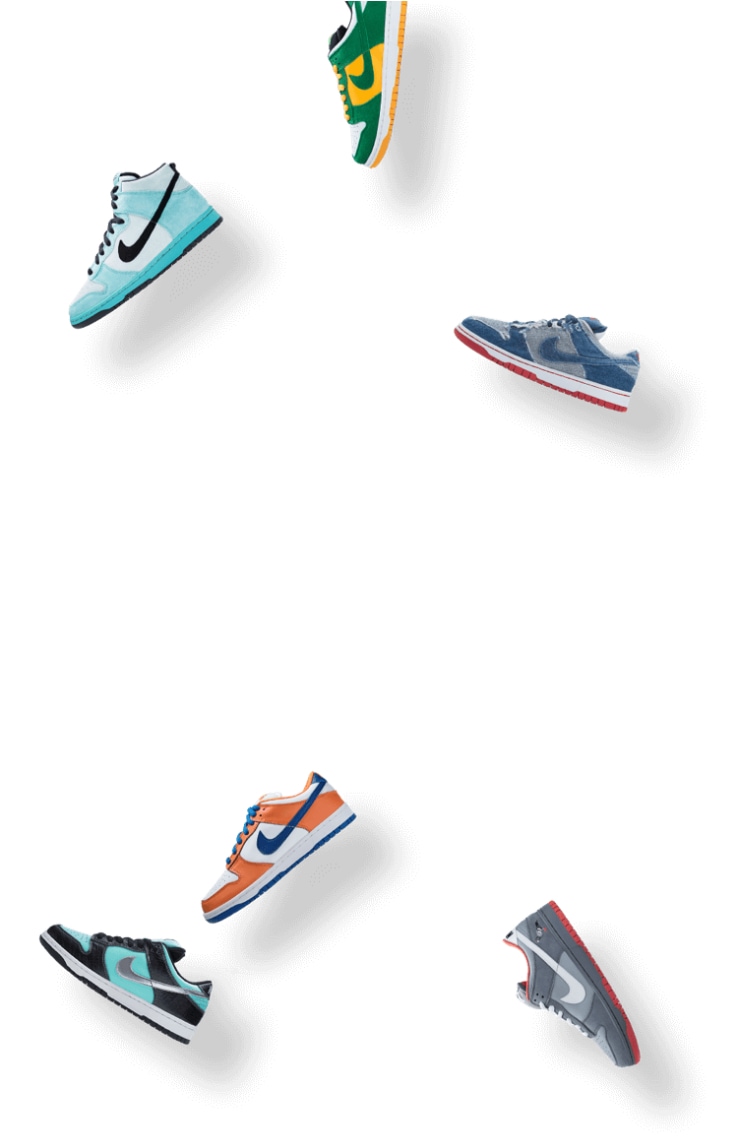 We’ve already talked about the qualities of skate shoes. Their outsoles are thick and super grippy and the uppers don’t tear easily. Think of Vans skate shoes as an ideal description if you ever get confused about the terms. The upper is double-stitched canvas, the midsole is thick, and the outsole is vulcanized rubber. Although skate shoes may shift to leather or suede uppers for fashion purposes, what’s important is that the sturdy rubber soles stay.

Nike Dunks have slim tongues whereas Nike SB Dunks have cushioned tongues. You don’t need to hold two pairs to be able to tell (but good on you if you can!). Find rotating images of the pair you have your eye on and eye measure the thickness of the tongue. If the tongue is slim and appears bendy, it’s a Dunk. And if the tongue appears fluffy like a tiny pillow case, it’s an SB. 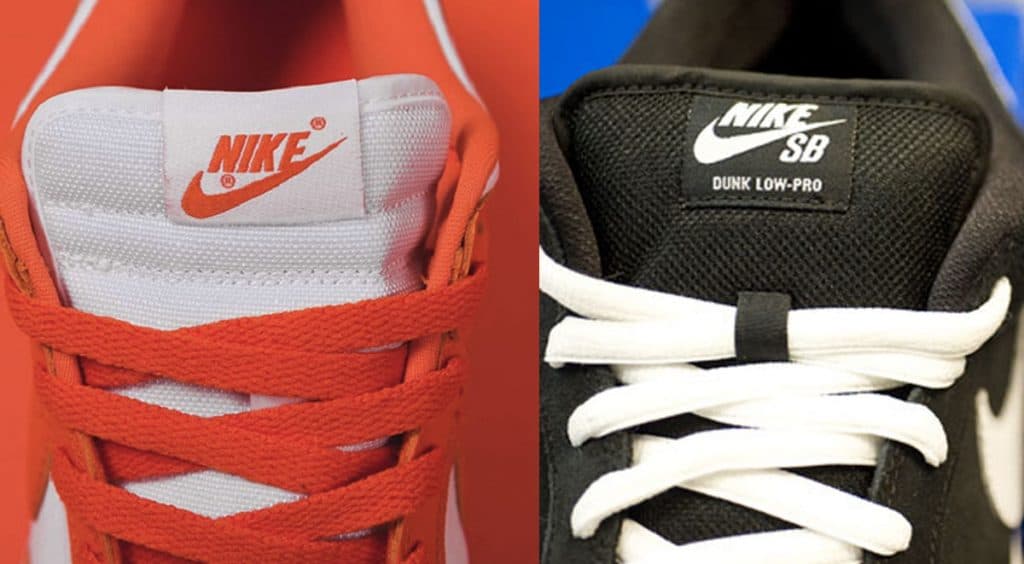 Nike Dunks have flat laces whereas Nike SB Dunks have puffy laces. Much like the tongue trick, only easier! Because flat laces and round laces are visually different. There is no need for rotations or magnifiers for this trick. Relying on the dead flat or perky round shape of the laces will do. So in case the tongue trick makes you a little woozy, this’ll seal the deal for sure. 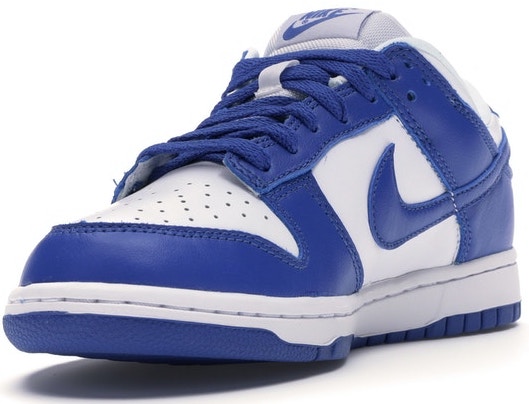 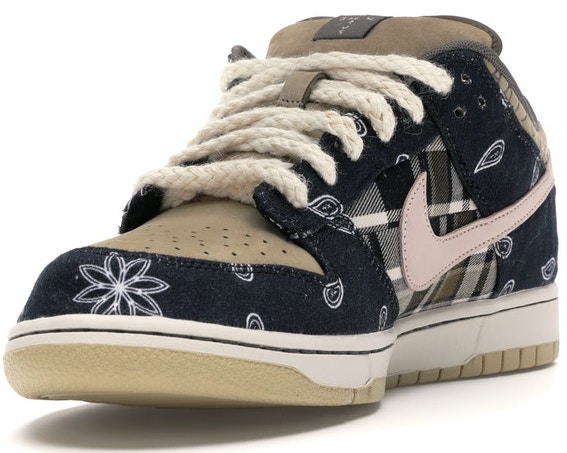 How Did Nike SB Dunks Get Hyped?

Nike SB Dunks lifted the retail price of skate shoes to $100. Before that, brands were lucky to hit $85 and have customers stick around. Except that Nike realized the low-key reputation it was facing and played it smart. What the mother of all brands does is it fills SB Dunks with all the hype they can take. So that when they drop, a $100 is worth peanuts next to aftermarket values. We’ve got Travis Scott, StrangeLove, Ben & Jerry’s, Supreme, and many more hype brands lined up to collaborate and have their name on an SB. Especially in 2020! We’ve got mind-boggling designs sold for cheap with a very limited number of pairs. There’s nothing about these sneakers that isn’t hype! Kudos to Nike for taking an underrated culture and putting it on top of the game.

Now everyone who is anyone strives to get their hands on a good pair of Nike SB Dunks. Even if they don’t know the first thing about skateboarding! All because Nike found the willpower to make an underground sport a universal trend. 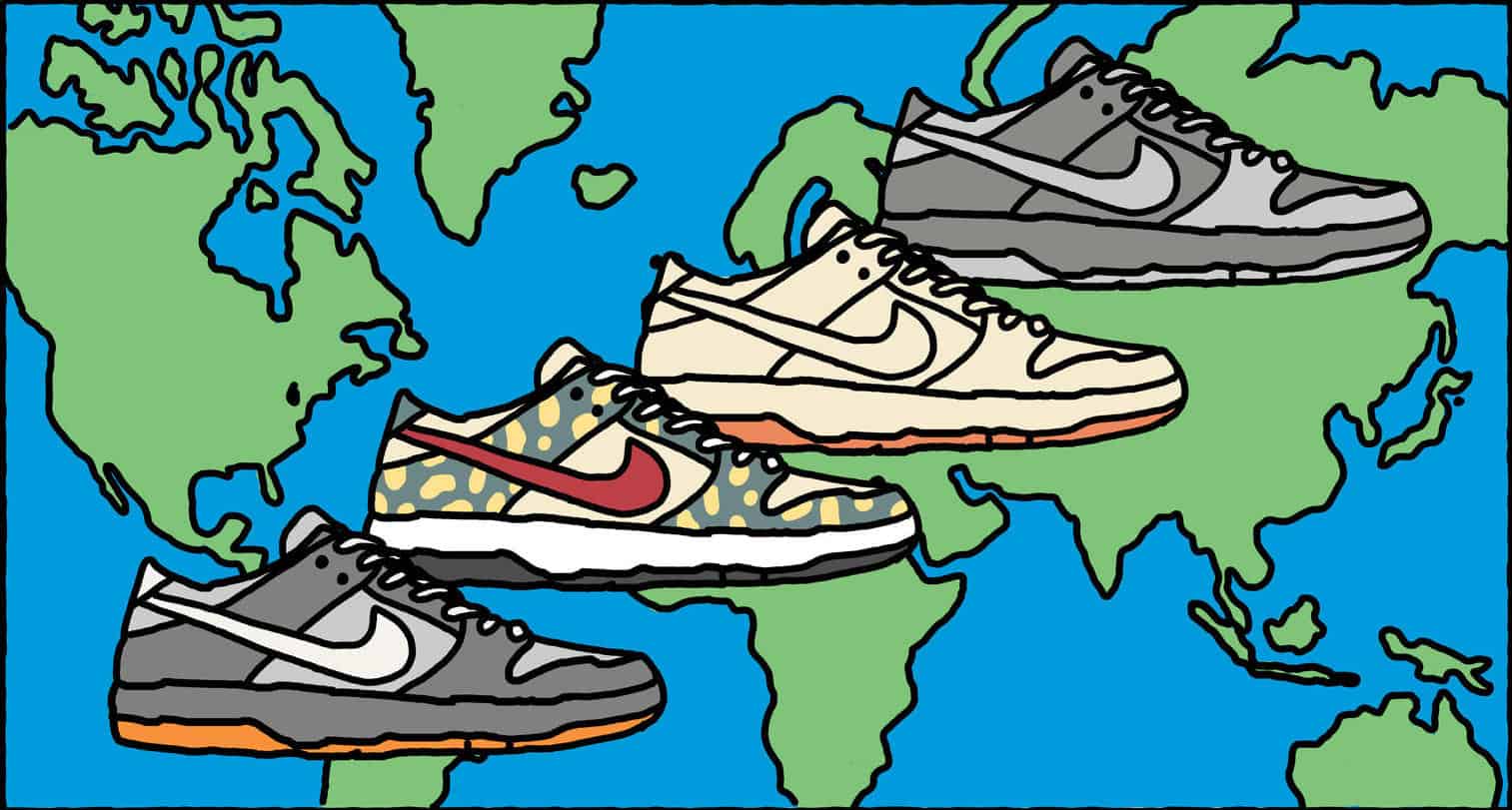 We walked down the life line of skate shoes that took different forms since the fifties. Non-skate sneakers were adopted at first and most skaters even went barefoot. A huge breakthrough took place when Vans boldly introduced their skate shoes in 1966. And after that, brands like Airwalk and DC pushed the boundaries with skate shoe classics in the eighties and nineties.

But the 3 year difference between Tony Hawk’s Playstation game in 1999 and the release of the Nike SB Dunk in 2002 was the greatest waiting period in skateboarding history! Because the hype that Nike managed to create around the SB culture introduced it to the world. That’s how it rose above its double digit value and expanded beyond the minor category of skaters.

Want in on Sugar Skates?

If the Nike SB Dunk hype got you all seduced, our blog dedicates a great deal to upcoming releases. All thanks to our bot’s exceptional performance on hype Nike drops. So, if you feel you’re one step away from being an irreversible Nike fan, you might want to check this 5 minute post.