The fresh prince let us in on what it means to live an “upside down” life in the nineties. And we’re here today to tell you about an Air Jordan worth the flip and the story. As you know, Will, the main character in The Fresh Prince of Bel Air, rocked precisely 9 Jordans during the 6 years the sitcom aired on NBC. We counted. If you did too, double check your math here. He wore the Jordan 5 Metallic, the Jordan 5 Fire Red, and Jordan 5 Grape in the first season, in that order. Which is why the Jordan 5 model shapes the fashion hype of the show. We got a Jordan 5 Bel Air Retro in 2013, remember?

This year’s been huge for the model as well. Retros have been flyin’ about like it’s reincarnation day. The Jordan 5 Metallic shook on it with Virgil Abloh back in February. Later on in May, the Jordan 5 Fire Red flashed its silver tongue. And not so long ago in June, the Jordan 5 Alternate Grape mashed some velvety grapes into a summer cocktail! But the top topping? The Jordan 5 Top 3 with its brilliant mashup of all three OGs. So, Retro wise, there’s nothing more the model can spit out this year. And since limits were realized, holla to the silhouette’s superstar for some spice! Here’s to the prince of neon stripes and tie dyes, the Jordan 5 Bel Air 2020!

The cool grey color base on the 2013 Retro was cool and all, but where in Bel Air was that crisp?! Will kept it fresh with bright neons, crop tops, and crazy patterns. So, if this Jordan intends to look the same, it’s in desperate need of neutral ground. Which, in this case, is the crisp white base. Not only does it boost the neon designs but it gives your eyes a color break. 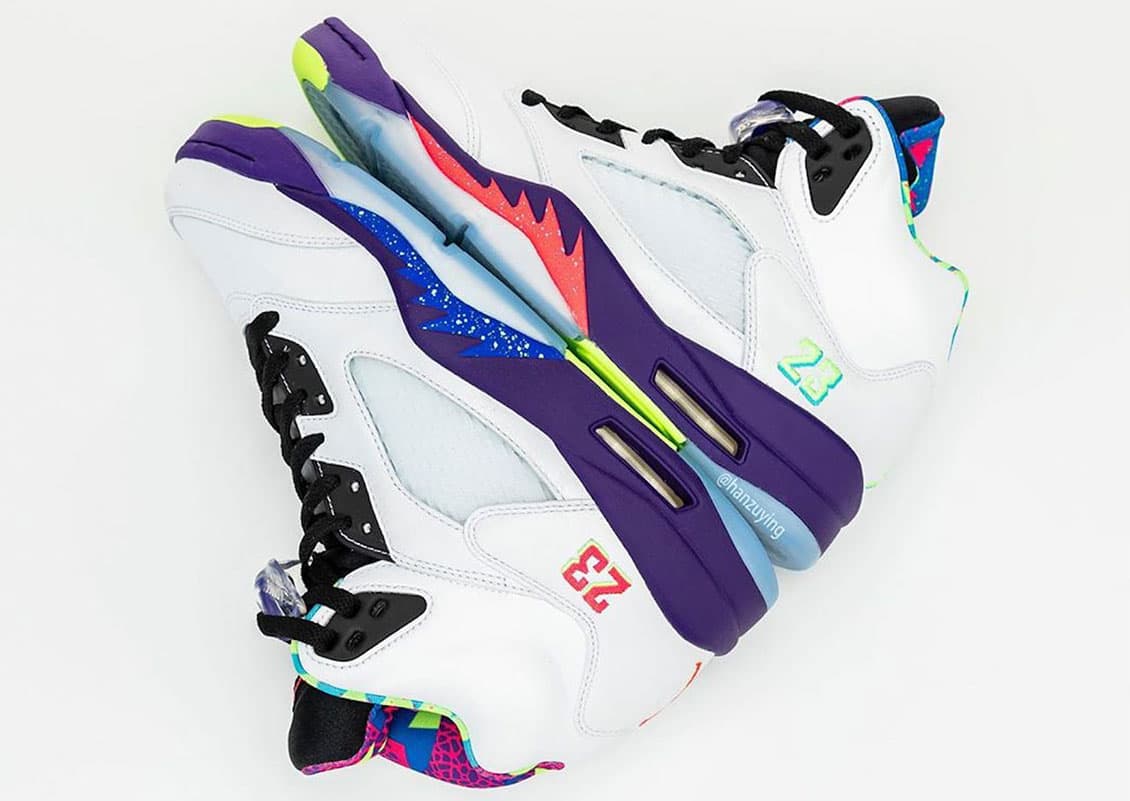 Purple takes over the midsole area. The popular shark tooth takes a dip in a starry ocean on the right pair. And a pool of pink gloss on the left pair. The 23 print on the left side heel is neon green, similar to the neon yellow outsoles that compliment the purple midsoles. As for the right pair, 23 takes after the glossy pink shark tooth on the left pair. A bit overwhelming, but if you take a close look at the sneaker, it all ties together. If you’re in line with the pattern, the same applies to the Jumpman logos on the black tongues. Right be jumpin’ in glossy pink and left be dunkin’ in neon green. As for the sockliner and inner world of the sneaker, it’s saturated with multicolor shapes and patterns. Like a nineties kid’s wallpaper (or hangover).

When in Doubt, Blame Will!

The Jordan 5 Bel Air retails for $190 and is now reselling in the $400-500 range on GOAT. Expect it to drop on August 15 on Nike.com and other Jordan retailers. For a nostalgic treasure like that, what better botting than with TSB, the best Nike bot treasure hunter? If you didn’t make it to our first restock, stick around on our Twitter page for future giveaways and success proof!