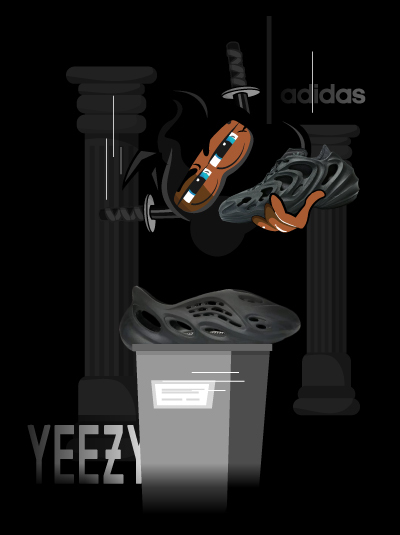 So is Adidas taking advantage and copying designs now that Kanye ain’t in the picture anymore? Well, who said that the Three Stripes wasn’t already pulling this shit way before calling it off with the rapper? The only difference today is that Ye is no longer here to express his opinion about the upcoming adiFOM Q! But that doesn’t mean his fans ain’t expressing enough opinions to last Adidas for life! The same fans that are now torn between keeping their Yeezys or giving them up for the aftermarket to make some profit!

If you think this is the first Adidas design that stirred up quite the controversy, you couldn’t be more wrong. We’ll get to the adiFOM Q x Foam Runners in a lil. We gotta tell you about the sandals and clogs first. So, earlier this year, Adidas dropped Adilette 22 sandals that looked like Yeezy Slides carbon copy. But Kanye being Kanye, didn’t just sit aside and call it a coincidence. He voiced his opinion directly to Adidas CEO and called him out for blatantly copying Yeezy’s designs. But what Ye thought is that he was invincible and addressed the public by saying: “This is for everyone who wants to express themselves but feels they can’t cause they’ll lose their contract or be called crazy.” Too bad he did lose his contract and is kinda called the latter by many.

Shit didn’t stop here, y’all! Adidas didn’t give people time to forget the “fake Yeezy” as the brand hit ’em with another fake thing. In August, the Three Stripes thought it would be a good idea to drop another Yeezy-like shoe. And guess who the brand collaborated with on this one? Well, whom other than beloved McCartney! Adilette wasn’t enough as Ye was hit with yet another rip-off kinda thing, McCartney Clogs. These clogs share close similarities with Foam runners. And this time fans are the ones that went on about it before ye could form a word. However, at that time, we didn’t hear a thing from the CEO of the no-longer-in-work-Yeezy brand.

No more Yeezy designs to copy? Well, that explains the latest adiFOM Q’s design! You’d think we’re gonna tell you that the brand decided to copy another design that ain’t related to Ye, but no. The Three Stripes decided to remake the Foam Runners with an added twist and call it a brand-new design. Way to go Adidas!

Now Is Adidas’ adiFOM Worth Copping?

As per resale, no! It barely makes any profit on the aftermarket. And on the hype level? Also no. adiFOM are more like your next beaters. And with Adidas dropping many colorways already, seems like these will be available always!

So if you’re thinking of piling up proxies and running a sneaker bot for these, you might wanna reconsider. Adidas’ crazy hype hot days are over. Or are you on hold for a while? Thing is, with Kanye out of the game, it’ll take Adidas time to find an equally desired collaboration. So stay on the safe and profitable side and cop Nike.

Nike sneakers along with Air Jordans are the gift that keeps on giving. With resale values ranging from $100 to literal thousands, you know you’re winning with Nike and the right Nike SNKRS bot. Read here to know how you too can make money through sneaker reselling!