What does Scottie Pippen have to say to the King now?! Goes without saying that the LeBron Watch series is hyped to welcome the Nike LeBron 17 Uptempo. A fire-breathing reptile on feet! Which clearly takes after Pippen’s 2017 Bulls-inspired remix Air More Uptempo Chicago. Further leading back to the 2005 Hoop Pack. Which, in addition to Pippen, included NBA greats like Penny Hardaway and Shawn Marion. The Jordan brand dropped its tribute to Nike Basketball on April 30. With the AJ1 Mid Nike Hoops. And now King James is keeping up with the Court King. After dominating the Nike NBA 2K20. With the Bron 2k Playoffs! And releasing some time in 2020 is another time bomb! The Nike LeBron 17 Graffiti! Which takes after the hyped Nike LeBron 4 NYC of 2006, reselling for over $3,000 on GOAT! Fingers crossed LeBron chose the right model for this Uptempo! If you’re gonna use the most consistent Nike bot in the market, you gotta make sure the sneakers’ value is likewise! 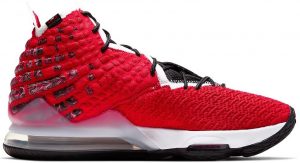 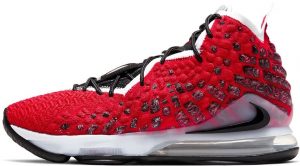 Battleknit uppers in University Red give off the iconic scaly reptile external. And black intervenes on the midsole and heel areas. For a 3-D design effect. The black tongue and white sockliner continue their pattern on the throat area as the lacing system. If you look at it from above, it clearly inherits the throat design of the Air Uptempo 97. With the retro of the Hoops logo marked right above the toe box instead. Both Zoom Air pods and Air Max units provide cushioning. And a translucent midsole keeps them tight. This history-packed Nike LeBron 17 Uptempo will release on May 8, 2020 on Nike.com for a retail price of $200.

This Uptempo Be Packin’ on Nike Basketball History! 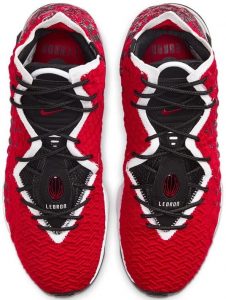 The Nike LeBron 17 Uptempo is an unmistaken Retro of 90’s NBA greatness. It’s got Pippen walking the walk. And the Nike Uptempo 95 talking the talk. An honest tribute to Nike Basketball. And with a resale value for $400-500 on average, that’s double its retail at least! That’s what The Shit bot is here for fam. To cop the drop. And make sure you get your hyped Nikes and Jordans flexin’. Nothing but the best colorways right around summer! And the best Nike bot to keep as many tasks rolling!