What is it with sneaker collaborations inspired by transit systems? When one collaboration of the sort drops, it’s a one-time vision for the homeboys to light up. But two transit-inspired sneaker collabs releasing months apart in one year? That’s one hell of a spike in the transportation trend! The Jordan Chicago UNITE Collaboration featured 8 sneaker designers, one for each Chicago transit line in February 2020. Top mentions include Virgil Abloh’s personal take on the Jordan 5 Metallic Black. And Sheila Rashid’s purple Jordan 1 Mid. Air Jordan kept it tight with the Chicago Bulls hometown. But Nike pushed the transit trend all the way to Seoul with the Kasina x Nike Dunk Low. Another skateboard brand is dunking this September but this one’s taking the bus instead!

Salvation is finally here with this juicy giveaway. If you’ve got our Twitter page as your go-to tab, your dedication may finally pay off. This is the reason we recommend you stay locked on Twitter. As the best Nike bot operating on all Nike regions, our prizes are as consistent as your Ws. We work to make our users proud and if you follow the 3 simple rules below, there’s a chance you’ll be one of them real soon.

Winners will be announced next Saturday!

Kasina started out as a skateboard brand in Busan, 1997. It expanded to become Korea’s largest streetwear concept store in Seoul after 2000. By importing and distributing various hyped brands like Stussy, Nike, and New Balance. Roughly twenty years after spreading hype across South Korea, Kasina now collaborates with Nike Dunk. In tribute to the bus transit line connecting Seoul to Busan. Get the sentiment? 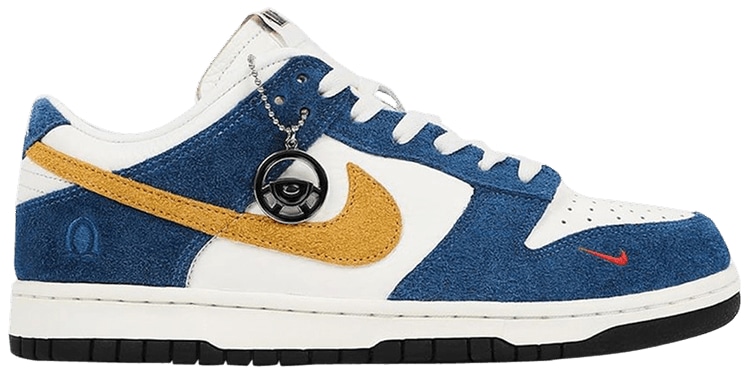 The jade colorway goes under “Road Sign” and the blue colorway under “80s Bus.” A line of common sense that appeals only to Koreans so hang in there. Cause it’s pretty simple on the outside. Both Dunks feature suede overlays in their designated colorways. In addition to hang tabs influenced by traffic symbols. The only pro of the jade Dunk is that it features “Busan” and “Seoul” instead of the Nike branding on its heels. So, if you put your feet together, there’s really no need to take the bus at all. For non-Koreon coppers though, the blue Dunk with the regular Nike heel branding may actually be a pro. So it’s really about where you stand, as long as you don’t get hit by the bus.

Join Our Giveaway & Cop Away!

The Kasina x Nike Dunk Low “Road Sign” drops today and the “80s Bus” Dunk drops on September 25th. Bluey is already at $1K on the resale market and booming. Similarly to the Nike SB Instant Skateboards sneaker dropping tomorrow, no price tag is definite yet. But we can assume they’ll both retail for $100. It’s a thrilling weekend for any Nike copper. And you’re one RT, Like, and Follow away from being a darn pro!