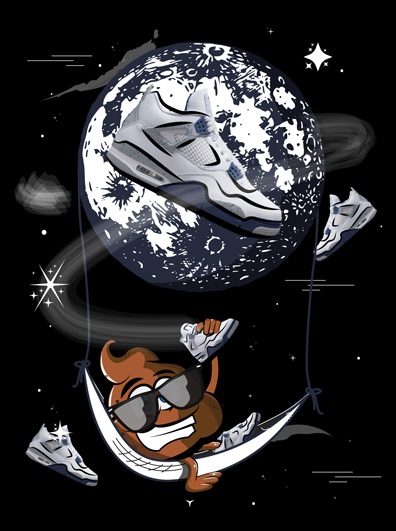 Midnight is a very interesting time. From Cinderella losing her shoe to monsters coming out from under the bed, we have it all. But this time, midnight hits a lil different because it’s a pair of sneakers we’re talking about! The new Jordan 4 Midnight Navy looks like the pair you wanna wear during all times of the day. And speaking of sneakers that always look good, did you check out the new Jordan 1 Lost and Found? If you haven’t yet, watchu waiting for? Awesome and valuable kicks aren’t always around! But if you already have, then read on for another sick release.

No need to get that bat light fam, because this ain’t that kind of midnight! Jordan 4 Midnight Navy is pretty light for its name fam, but don’t let that put y’all off. The kicks feature a white leather upper with grey and midnight navy deets. But they wouldn’t be that cool if they called them Plain White with Some Color Jordan 4s, would they? Didn’t think so. Anyway, the midsole and heel tab also come in the same good-looking grey and navy mix.

Now if you pay some more attention to the joints, you’ll notice that the grey isn’t plain. Instead, it features some paint splatters in midnight navy! So all in all, this new colorway doesn’t look too shabby. It actually looks like the Jordan 6 Midnight Navy that we got a few months earlier. So if you’re starting a collection, these two will look pretty cool in it.

Jordan 4 Midnight Navy’s hitting the shelves and Nike SNKRS on October 29, 2022, and will retail for $210. You can also check all the October Jordans here, you know, just to make sure you got your priorities straight. And if you’re wondering whether these babies should be on your must-have list, it’s a yes. If you wanna flex that drip, then you already know why. But if you wanna flip, then they’re also worth it since they’re rackin’ up $376 on average in resale! So if you wanna get started with all the sneaker reselling business, then this ain’t a bad way to go.

Just kidding, but we totally recommend being fast when them Js drop. You know how it gets on Nike SNKRS, especially when it’s a hot pair. So why go through all that pain when you can run a good Nike SNKRS bot on drop day? A bot like TSB will make sure y’all get a fair chance at catching pair… or a couple of ‘em! Just make sure you got that shit figured out with good proxies and Nike accounts. Once you do, you’ll have the best chance at catching Ws with fellow TSB users! But remember, nothing is for sure in this industry, even that W. Good luck!