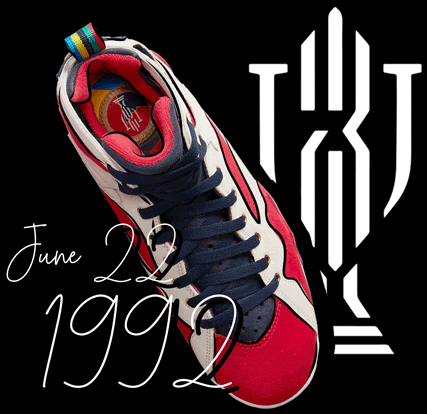 Our stories are all from the pre and early 2000s eras lately, and we ain’t sorry about that! From the return of the Nike Mac Attack to eBay Dunks, the industry is in retrograde, not just the planets. Don’t get us wrong, we live for all that shit, especially if it’s a pair with a sick story behind it! And the new Trophy Room Jordan 7 is looking like it fits these characteristics. So what’s up with the latest Jordan-on-Jordan collab? Read on to find out!

Before we get to 2022’s sneaker news, you gotta know why you should care about the kicks. That’s why we’re gonna go all the way back to 1992, the year Barcelona hosted the Summer Olympics. That year, a rule change allowed NBA players to be on the roster of the Olympic team. And boy did they do that and more! The 1992 Olympic roster included the biggest names of the era. Some of the names are Michael Jordan, Magic Johnson, Scottie Pippen, Charles Barkley, and more! You can check out the full roster here. 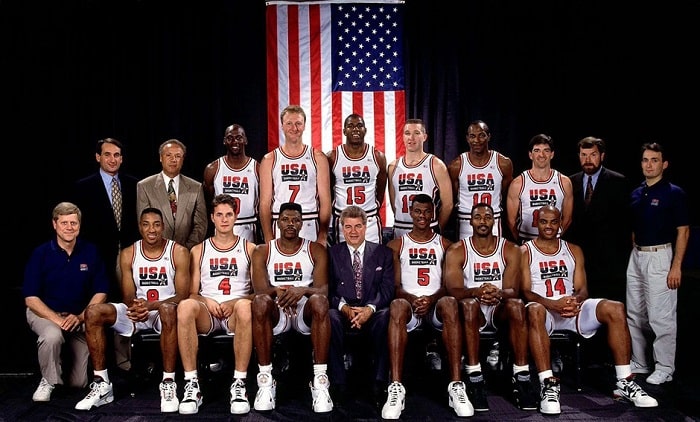 So, under the leadership of Magic Johnson, the Dream Team went on and easily won the gold medal. In fact, they won by an average margin of 44 points, aka a lot! But all the technical talk aside, the team gave us some sick fashion moments, especially Jordan. We all remember his iconic Barcelona 1992 fit, and we’ll be lying if we said we don’t wanna rock it! And another item we can never forget about is the legendary Jordan 7 Olympic colorway, duh!

If you’ve been in the sneaker industry for a while, then you’re probably familiar with Trophy Room. But if you’re new, here’s what you should know about it! Let’s just start with the fact that the owner of the store is Marcus Jordan, MJ’s second eldest son. So the store opened its doors in 2016 and with it came the very exclusive Jordans! Sadly though, the store and Jordan the son faced some backlash after the Trophy Room Jordan 1 backdoor controversy.

And Now We Got the Trophy Room Jordan 7!

Although the pain of the Jordan 1 is still kinda fresh, we gotta think about the future. And the future holds the pretty lit Trophy Room Jordan 7! These babies are a nice play on 1992’s AJ7 Olympic colorway, and we’re down for that kinda shit. You see, instead of the white and obsidian upper, we’re gonna get it in beige and red. The kicks will keep the same classic sole colors, which is a relief because they looked dope enough. 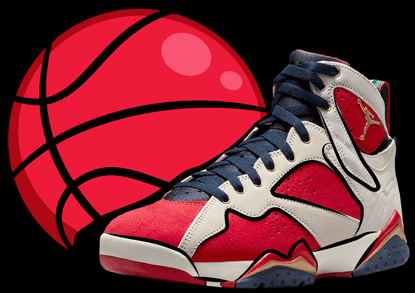 Another cool touch is the Olympic ring colors on the heel tab with the gold heel branding! The gold is obviously a nod to the gold Olympic medal the dream team proudly carried back home from Barcelona! Finally, we have Michael Jordan’s signature embossed on the side of the heel to complete the look. You know, who wouldn’t want the GOAT’s autograph on their kicks? 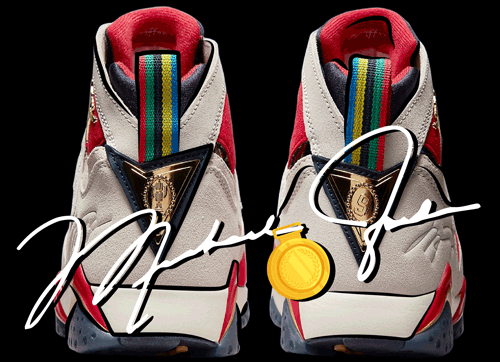 When Can You Get the Trophy Room Jordan 7? 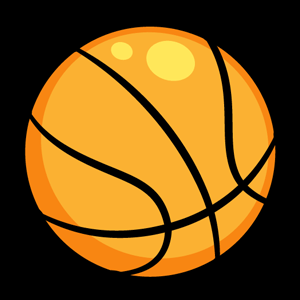 So here’s what we know so far. The new Trophy Room Jordan 7 will drop on Trophy Room’s website in October 2022 and will retail for $225. And although we don’t know how much they’re worth in resale, we can expect them to be worth the cop. Let’s just cross our fingers and hope that we don’t go through the backdoor scandal again.

In the meantime, if you’re looking for a pair of Nike kicks or Jordans, Nike SNKRS is the way to go. But any pair worth its retail price will be hard to get manually. So make sure you get yourself a good Nike SNKRS bot to lend a helping hand! The good thing is you don’t have to look way too far because TSB is one of the best Nike bots on the market today. With more than 50 regions supported, you can cop your heart’s desires of kicks and apparel! Just make sure you got the best proxies and Nike accounts on board, and you’re good. Good luck!