If you haven’t matched the name to the shoe yet, we’ll drop you a fat hint: Sean Cliver! He’s the skateboarding legend and artist behind the StrangeLove Nike SB Dunks and the upcoming Sean Cliver Dunks “Holiday Special”. Although Cliver’s experience with Holiday releases revolves around the wicked Nike SB Krampus design of 2012, he has parted with the devil for this year’s tribute. Sean Cliver’s raunchy and extreme artwork has revolutionized skateboarding culture. His collaborations with Nike and Supreme have also exposed his “naughtiness” to the sneaker and streetwear industries.

His artwork taps into taboo and uncensored topics around religion, politics, and inappropriate social behaviors. Whereby Sean mainly uses skateboards and T-shirts as stages of expression. To sum up what Cliver’s art encompasses, it displays hard cold truths through exaggerated animations. The artist even goes as far as to depict his vision of Christ and his disciples. For a better idea of Sean Cliver’s artwork, click here. 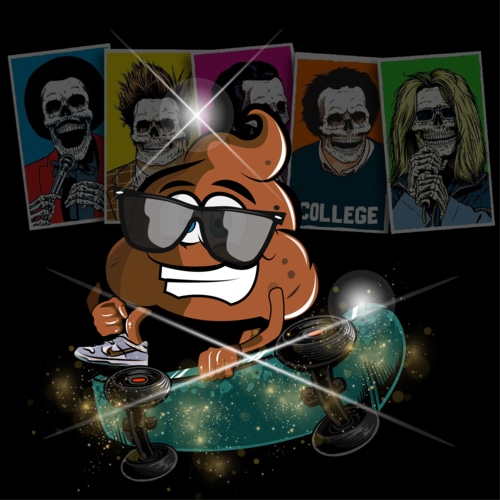 In contrast to his StrangeLove prize on V-day, these Sean Cliver Dunks take after fallen snow. Snowflake blue suede overlays complement the reflective golden theme on the Swoosh and Nike branding. In addition to the silver laces and heel finish marks. This light colored sneaker elevates Cliver’s style to a Holiday-friendly theme. One of its insoles displays Sean Cliver’s signature for a co-branded surprise. And the second insole remains true to style with a full-on Holiday inspired graphic. Which, if you happen to know the first thing about Sean Cliver’s art, is highly censored and fetish-free. So, feel free to grab a pair for them kids, if you got any. Plus, if you turn these kicks around, the glitter blue outsole will shove you right into winter wonderland!

Cop the Blue Boy That Ain’t so Blue

Expect these Sean Cliver Dunks to drop in adult, kids, and toddler sizes for $110, $90, and $70 respectively. It will first release in select skate shops on December 18th and will officially drop on Nike US the next day on the 19th. We’re still waiting for global release dates to hook you up internationally this Christmas. Cause this blue boy is reselling for at least $1,000 on GOAT. You can’t spare this retail gem if you plan to make it as a reseller, fam.

So if you’ve got TSB on your side this Christmas, good luck copping these Sean Cliver Dunks on the 19th. And if you missed our restock and are still trying to score a copy of the only working Nike bot, keep posted @The_Shit_Bot for prizes and giveaways this Holiday Season. There’s a chance we might feel generous when them Christmas cookies start baking!