Nike Off-White ™ SB Dunk Leather Are Back with Three Colorways!

So, a while back, Virgil Abloh revealed the upcoming release of new Nike Off-White sneakers in the Paris SS20 fashion week. Did y’all see that crazy YouTuber that crashed the Chanel runway? That was one heck of a runway for Nike! Even the Nike x Sacai  LD Waffles were featured.

Anyways, we all thought the Dunks were dead…
But they back! They back, especially after they were released with Supreme and now again with Off-White.
And they dooope!

Now, these aren’t the first sneakers that Off-White and Nike made together, but they are probably the sickest of’em all. This Sb Dunk is dropping in three different colorways too! University Red, Pine Green and a recently revealed Michigan-inspired Navy/Gold colorway. 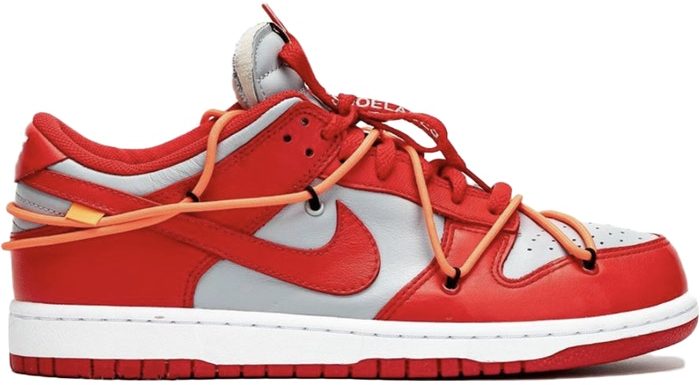 Each SB Dunk has an extra shoelace. Virgil Abloh explains in a tweet that this is for creative purposes. He wants each sneakerhead to make his own Nike Off-White dunk, his way. They are also tagged with the infamous “FL” which stands for Futura Laboratories on the heel of each sneaker.

Even if you’re not into leather. Man, Virgil got you! These colorways are coming in different packs too! The Nike Off-White Vapor Street and the Nike Off-White  Waffle Racers! So if you’re into the spikey punk look or the netted upper style running shoes, they got it all.

So, Nike Off-White’s are easily on our list of best shoes when it comes to style!
And especially when it comes to sneaker resale.
But, if these sneakers still aren’t your style; you could cop yourself a pair of the Air Jordan 6 Travis Scott coming up on the 12th of October! La Flame’s sneaker is for sure the way to go if you’re looking for a sneaker with insane hype and resale value! Talk about them camouflage ready kicks!

Now that’s what we call a sick pair of kicks.