Nike Dunk Low UCLA: Wear It Like A Bruin!

The Nike Dunk Low UCLA is one hella kick to flex this month. Read on for more details and release info!

You ever heard of the saying, one man’s meat is another man’s poison? Well, this is exactly how we can describe the relationship between Nike, UCLA, and Under Armour. The latter’s loss is the former’s gain. Do you even know what we’re talking about? If not, let’s enlighten you… So, back in 2016, Under Armour and UCLA partnered up and agreed to a 15-year partnership worth $280 million. This was the school’s largest apparel arrangement. And for four years all went smoothly until Under Armour called it quits in 2020. Their excuse was that the Bruins weren’t exactly keeping their end of the deal in granting the previously agreed-on marketing benefits. So, long story short, UCLA pulled a Johnny Depp on Under Armour in court! UCLA made it out of its toxic relationship with heavy pockets.  67.491 million dollars kinda heavy pockets…

And nearly as soon as they left Under Armour, UCLA joined forces with Nike and Jordan Brands. They agreed on a six-year partnership starting 2021. The are no compatible partners such as these three. They all have a championship mentality influencing both the sports field community and their own.

Now that the history lesson’s over, Nike and UCLA are teaming up once again and dropping the Dunk Low UCLA. AKA one of the coolest Dunks you’d ever flex!

Nike’s big on simplicity these days. It’s only logical since simple shit’s today’s best-selling. Take the Panda Dunks, for example. They’ve been restocking over and over again and wiping out in a matter of minutes. Although the colors ain’t that simple, the style is.

College colors are always the shit when it comes to Dunks Lows. they just look naturally perfect on them. And UCLA colors are no different. Although back in the 80s they used to be mainly associated with Adidas and Puma. Now the unexpected has happened, University Gold and Royal Blue cover most of the kicks. The school’s golden hue takes over the toe boxes, the quarters, and the laces. Contrasting against the gold is the university’s blue. It nearly covers the rest of the shoes, like the eyestays, heels, tips, and swooshes. Blue outsoles and white midsoles complete the look. Simple yet daring. And if you wanna flex these Dunks you better know how they fit. Because, you know, y’all only get one chance at copping them. 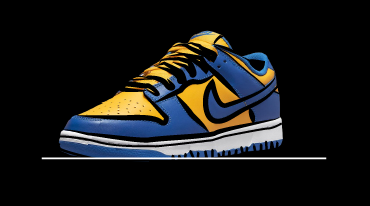 The Shit Bot: The Way To Get Your UCLA Dunks

Hardcore fans will be able to pick up the Nike Dunk Low UCLA on October 25th, 2022. And the pair’s retailing for the usual $110. And unlike the Pandas, there’s a chance that it wouldn’t restock. So, make sure you cop a pair.. Or more now. So, whether you wanna flex or flip them, you’re gonna need a dope Nike SNKRS bot. And since Nike ain’t taking a break with them sales rules and restrictions, why not invest in this Nike bot for a whole year? Don’t worry, we won’t hit you with a four-digit figure, because luckily it’s available for only 300$ per YEAR. And TSB also supports more than 50 regions globally. Click here to know more!

So, TSB managed to help its users score many Panda Dunks before. Which is proof enough that your chances at copping the UCLA Dunks are high. Here’s one example.