The Kasina Nike Air Max 1 Collab Is All About Them Relationships!

Why stop at just one collab when it’s such a success? That’s the shit that Nike lives by, and we ain’t sad about it, not even a lil bit. Why? Because we get mo’ kicks mo’ kicks! And the new Kasina Nike Air Max 1 collaboration looks as promising as ever. That’s why we’re gonna check out everything we know about the kicks so far. And we all know how epic sneakers with stories are, so that’s a drop you don’t wanna miss peeps! Hop on, because it’s gonna be one heck of a ride! 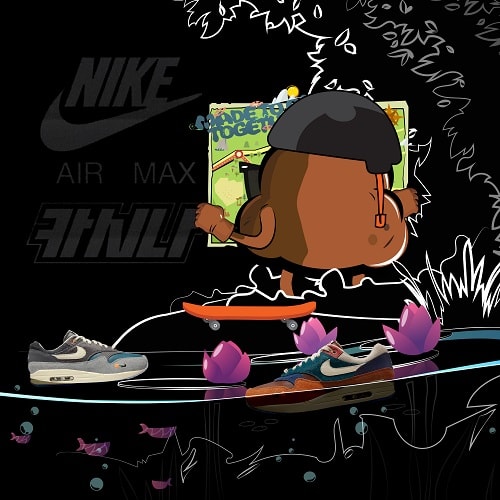 So back in 2020, Nike partnered up with the South Korean store on two Nike Dunk low colorways. The inspiration behind that collab was travel through South Korea and Korean transport. And it’s definitely an understatement to say that these babies were bangers. Also, they were exclusive to Asia, so you can imagine why everyone wanted them. Both colorways are worth $1,000+ in resale. So obviously, both brands went back for another round. And this time, they’re choosing a classic silhouette to take shit to another level!

Kasina Nike Air Max 1: Made To Be Together

So last time, the sneakers were a tribute to transportation in South Korea. This time, they’re digging a little deeper into Korean customs and traditions. Nike and Kasina are specifically taking inspiration from the custom of gifting carved ducks to newlyweds. The “Won-Ang” ducks represent good fortune, fidelity, and lasting love. That’s why the Kasina Nike Air Max 1 in both colorways feature two embracing ducks on the heels and insoles.

Now let’s get into some details about the kicks. The first colorway will come in different shades of grey and teal. Meanwhile, the second pair will come in a mix of brown, orange, and teal. Both colorways are a direct nod to the ducks’ habitat! And the silhouette’s shape kinda gives off the same vibe, so win-win fam!

If you happen to live in South Korea, you’ll be happy to know that the kicks will drop exclusively on Kasina in June 4, 2022. But if you’re gonna wait like the rest of us, then it’s June 8, 2022, on Nike SNKRS for you peeps. The kicks will retail for $160 each, and that’s a pretty good deal considering their resale value! You can flip the grey pair for $413 on average, and the orange pair can go for around $445.

How Can I Score Both Colorways?

Ahhh, asking the tricky question. Well, it’s not very tricky if you’ve been around the sneaker industry for a while. You just gotta have a good Nike bot because them Nike SNKRS drops can hurt. The heartbreak is real fam. So make sure you get a bot that supports lots of Nike SNKRS regions and can score kicks anywhere! A bot like TSB, which is in stock and will only cost you $300. It’ll leave you with plenty of cash to spare on proxies and Nike accounts. Good luck!