Valentine Sneakers by Nike Are the Best Gift for Your Love in 2021!

Love is in the air homies! It’s already time to get your V-Day gifts ready. This year, many of us are spending their Valentine’s chilling at home thanks to COVID-19. So getting yourself or your significant other a pair of kicks is a cool idea, especially if you’re sneakerheads. Whoever says that you can’t have swag at home clearly wasn’t trying hard enough. Anyway, Nike prepared a pretty fly lineup of love letters and holiday-inspired kicks. However, if you’re not into the “in your face” approach, AJ6 Carmine is a cool alternative! Now, whatever Valentine sneakers you pick, you know that you’ll need TSB on this romantic journey. So whattaya waiting for?

Although it’s pretty difficult to top last year’s Strangelove SB Dunks, one can only try. And this Valentine’s day we’ve got some subtle love letters. So if you wanna declare your love for sneakers, these two pairs are a must-have. Both pairs dropped in Europe, and TSB did a pretty good job at copping that shit! But you, our US friend, get ready to cop on February 13th, who doesn’t like to see the “Got ‘Em” screen on Valentine’s eve?

We’d be crazy if we said we don’t like the new pair. These actually set the bar high for this year’s Valentine sneakers! The new Air Force 1 features a white leather base and light pink suede overlays. A read swoosh makes the kicks pop along with a white midsole on a pink outsole. That’s not our favorite part though! The tongue tags have hidden love letters underneath the branding. One says “True love since ‘82”, the other is just a heart with a swoosh inside. Another cool bit is the heart-shape dot on the Nike Air heel branding. Finally, the round toe box perforations come in heart shapes this time too! So, will cupid need to match you with that pair or the looks did it by themselves? The pair will retail for $130, but it currently resells for $350 on average. Pretty festive huh? 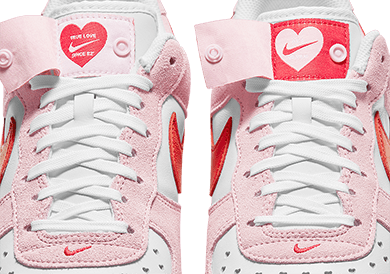 We stan classics with a clean holiday spin to them! The second pair of the “Love Letters” pack is the awesome Air Max 90. The kicks will come in the same color composition of white, pink, and as the AF1. However, the letters here say “ME+AM90 = True Love” on one side, and “AM 90 4Ever” on the other! So if you love the Air Max 90, it’s time to act on these feelings and buy this pair. The new Valentine sneakers will be women’s exclusive and will retail for $140. It also resells for around $200, so it’s some good pocket money if you flip several pairs!

The pair is as elusive as a lizard! Although it already dropped in EU countries, we still don’t have a release date for the US. Anyway, the pair features a plain white leather upper with a sail colored swoosh and midsole. The cutest bit about it is the red heart on the side of the heel! The kicks dropped through raffles in Europe so far and retailed for €109.95 (approx $130) Today. If you wanna buy the valentine sneakers off the aftermarket, you’ll find them for about $200!

You’d think that red, hearts, pink, and valentine is the most cliché combo ever. However, Nike managed to make that shit marketable! They’re dropping two pairs of Air Force 1 for sneakerheads to match with their partner. The men’s pair comes in a pretty monochromatic white leather upper. However, all the action goes on at the swoosh level! In bubble-like letters, the swooshes spell out respectively “Love” and “Love for All”.

The second pair features a white and burgundy upper with all the same details. Although we don’t really have any release dates, we hope they drop soon! Anyway, the kicks will retail for $110 and currently resell for about $160. So here’s another pack you don’t wanna miss out on! But make sure you’ve got TSB to avoid the L we all hate so much!