Jordan 6 Carmine Is Bugging Its Way to Us This February!

We love us a scandalous pair of sneakers! From a highly-coveted pair of kicks to the small disappointment of sneakerheads, we got it all here. The new Jordan 6 Carmine promises to be an interesting release to us all, but why? Let’s check out the new sneakers and why running TSB is the best decision you’ll make for this release! And speaking of awesome kicks, the new Nike Dunk Cobalt is also killing the Dunk game!

Okay fam, time for a quick round of science! Carmine is a bright red color pigment! The word itself comes from the Persian word “carmir” which means red or crimson. But how do they make carmine? Easy! From insects called cochineal that live on cacti in Latin America. So you do a little chemical magic and crush the insects… et voilà: a red pigment! In fact, carmine is still used today because it’s a safe, stable, and long-lasting color. This is ironic because the whole Jordan 6 controversy revolves around the dye!

Jordan 6 Carmine Is Blazin’ Hot Since ‘91

Not all AJ6 colorways come in interesting colorways, of that we’re definitely sure. Actually, the best we’ve seen of the Jordan 6 was Travis Scott’s version, and that was by no means a GOOD colorway! But we definitely consider Jordan 6 Carmine one of the best! It’s in fact a 1991 OG that everyone loves and has long waited for. The upper is made of a hot carmine suede base! 23-shaped white overlays complete the look. A cool bit about these kicks is that the release is true to the OG in all aspects, especially the Nike Air branding. They’re taking shit seriously at Jordan Brand y’all! The black midsole and translucent outsole are also awesome and make the kicks extra swag. And who doesn’t wanna be like Mike? 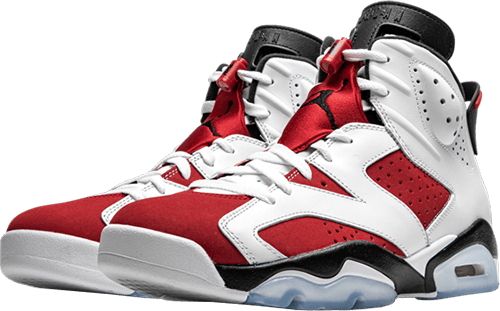 But as any big release, there must be some catches. And this time, it came in the form of a defect in the sneakers. Apparently, many stores complained that the Carmine upper was bleeding to the midsole and pods. And that turned the midsole to light pink. Although a part of sneakerheads didn’t like that, others thought that they looked better that way. What do you think? Will you try to cop a pair with TSB? Or will you let them stain other sneakerheads’ socks?

Some stores are seeing defect issues on the upcoming Carmine 6s 😰 pic.twitter.com/K9PbWNtOg2