Nike Ambush: Turning Style Into a New Kind of Sport!

Today’s not about sports and athleticism. On the contrary dear sneakerheads, it’s all about style. And according to Yoon Ahn, it’s about making style a kind of sport! That’s basically where the heart of the Nike Ambush partnership is. That shit is all about comfort, looks, and how you can merge both in one piece! So, let’s look at what went down since the two brands joined hands. That’s not all though, because we’re gonna check out some new kicks Nike Ambush has up its sleeve! And if you’re into meaningful shit, Jordan 1 Lost and Found is a pair you’ll definitely like.

A Little Brand History Before We Dig Deeper!

So, what’s Ambush you ask? The brand launched back in 2008 as a jewelry line by Yoon Ahn and Verbal. The inspiration behind the brand’s aesthetics is Tokyo, you know? Modern buildings, streets, neon lights, and all that shit! Anyway, what started off as a jewelry brand evolved into unisex apparel design. The brand went on to get multiple awards in the fashion world. And success attracts success; that’s why Nike came into play!

So, in 2018, the Nike Ambush partnership became a thing. From apparel to kicks, that shit been going strong for solid 4 years now! The first pair from the two brands is the mashup of Air Max 180 and Air Zoom Flight. Yoon took unisex to another level with the futuristic boot-like style in white and black colorways. And if you ask us, we’d tell you that these joints are pretty underrated!

The Time The Collab Went Biiiig

Now you could easily miss the first collaboration if you ain’t paying enough attention. But you know, it was near impossible to miss the Nike Dunk hype in 2020! And of course, Nike Ambush rode that wave and gave us the black and white Nike Dunk high. The kicks rocked motorcycle-like deets like an extended swoosh and a really high collar! These babies are worth $537 on average in resale, aka very profitable. Anyway, the kicks were such a success that we got two other colorways in 2021: deep royal and poppin’ fuschia!

2022 Is All About Customizable Kicks!

Nike Ambush been pretty active from 2018 all the way up to 2022. And the latest pair to join the collection is the Nike Air Adjust. The pair dropped back in 1996 and never got a retro ever since. Anyway, Yoon Ahn finally gave us these babies with the signature interchangeable straps to give that customizable feel! So far, two colorways are available: black and white. Interestingly enough, the kicks dropped in August 2022, and they’re still available on the Ambush website to buy!

What Does Nike Ambush Have in Store? 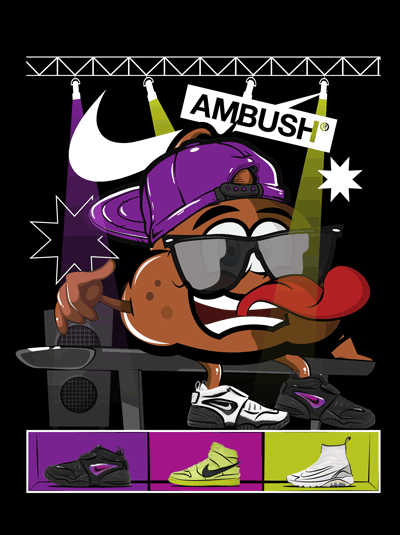 If you didn’t add any of the previous Nike Ambush kicks to your rotation, what are you waiting for? Don’t worry though; the partnership is still going strong, and we about to check out what’s in store. First off, we’ve got more Ambush Nike Air Adjust colorways in the making, and they poppin’ this time! You know, blue and red uppers don’t scream subtle shit in our books. So if you’re into the Y2K vibe, these babies are just what you need before 2022 ends!

Now, the second collab we have here will definitely be a must-have for many. If you liked Yoon Ahn’s take on the Dunks, you’ll love these. This time, she took the classic Air Force 1s that we all love and put her spin on it. From the extended swoosh to the bulky heel and stylish dubrae, the kicks will definitely be heartbreakers. In addition to black and white colorways, the Chicago colorway will for sure steal the show. So far, there are no release deets, but we’ll totally keep you in the loop on the shittiest blog ever!

Well, the kicks ain’t coppin’ themselves fam. You’re gonna need a powerful Nike SNKRS bot to kick ass on drop day. Luckily, you won’t need to look too far because TSB is here for you and your sneaker cravings! TSB supports 50+ regions worldwide, so you can try your luck wherever you are in the world. And to make sure shit goes smoothly, get the right proxies and Nike accounts for your bot. That way, you’ll make sure you have the best chances at Ws on release day!