Halloween Dunks Hit Different When They Spooky As Heck!

Hey everyone, we are frickin’ pleased to announce that the summer is officially over! Swimsuits are out, spooky deco and sweaters are in. Best thing is nobody will question this sudden change of scenery because it’s Halloween season homie! But as sneakerheads, you peeps definitely know where them priorities are. And this year they be going to the spookiest shit we’ll get: Halloween Dunks! Let’s take a look at what these kicks are all about and why you need ‘em ASAP. 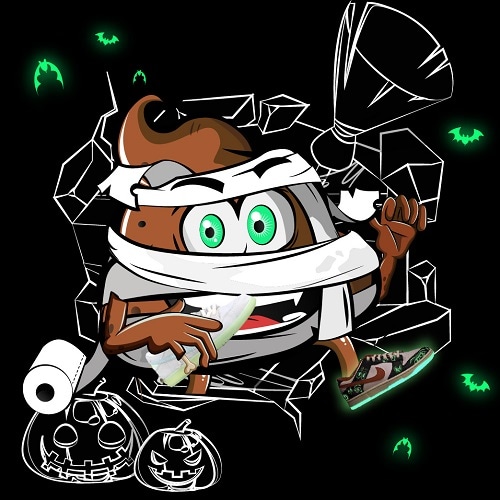 Halloween Dunks PRM 2021 – I’m in Loooove With a Monster

First up we got a sick Nike Dunk PRM that’ll make you feel like someone is watching you at night. If you’re wondering, PRM stands for Premium. In other words, the kicks have high-end materials, but they’re still a general release. Anyway, the kicks feature a white leather upper with black overlays, but that’s not even their best feature! The black leather rocks some creepy-ass cartoon eyes that glow in the dark along with the outsole. Finally, to get you in the right spooky mood, the Halloween Dunks have orange swooshes and sock liners.

These babies are set to drop sometime in October 2021. We bet our favorite toilet seat that it’s gonna be on the 31st! As for retail, they’ll go for about $120, as Dunks are usually worth. However, if you go to the aftermarket, you’ll find that the Halloween Dunks are worth $600+! The resale value can reach up to $1,200 so far, so make sure you get these for retail.

Moving on from the monsters under your leg to mummies because Halloween is all about the scares! If you don’t want all these eyes staring at you, you can go for a pair that has eyes on the back. That way they can creep out whoever walks behind you… Win-win if you ask our spook-loving souls. The second pair ditches the leathers and rocks a canvas upper that is pretty… mummifying. That ain’t all though, because the upper is a tear-away that will reveal the real upper. We haven’t seen that yet, but we hope we will soon. 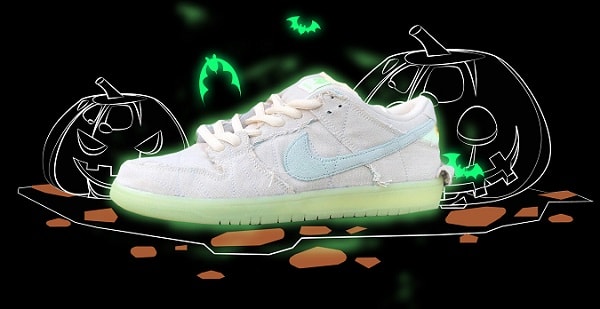 Oh, one last deet is that the inside of the tongue has the Eye of Horus. And that’s a nod to Ancient Egypt where mummification comes from! So you’re probably wondering when the Mummy Halloween Dunks will drop. According to rumors, the kicks will drop in October 2021 too, for $110. Now, although we don’t have any resale info, we’re pretty sure you shouldn’t sleep on a pair like this.

Now that we saw the Halloween Dunks, we gotta check out the latest Day of the Dead kicks. So Dia De Los Muertos is a Mexican holiday where friends and family gather to pray and remember their deceased loved ones. And because Nike and JB like to be inclusive with their representation, we’re getting kicks! We’re getting an awesome Air Jordan 1 Mid with festive graphics. The coolest bit is that the kicks feature the words “Siempre” and “Familia” on the tongue. This translates to “Always family”, and if the holiday ain’t about all that, we don’t know what is.

How to Catch Them Halloween Dunks and More

Aight fam, you saw ‘em, you liked ‘em, and now it’s time to cop ‘em! So how do you go about that? Well, you basically get yourself a crazy good Nike bot and hope for the best. A bot won’t really get ‘em, but they do boost the chance you need to succeed. If you wanna know more about what you’ll need, check out this proxies guide, and this list of accounts providers. Good luck shit fam!