So, if Yeezy 700 “Salt” and “Inertia” had a baby, it’ll be the Adidas Yeezy Boost 700 V2 in “Hospital Blue”. This is Kanye West and Adidas’ newest and final release coming this September.
These sneakers give you the sick, literally, hospital blue feels. It features a cold-looking grey undertone with some pale blue. Throw in some other ‘50 Shades of Grey’ and you got yourself the Yeezy 700 “Hospital Blue”.

The Hospital Blue sneaker is going to drop on the 28th of September, 2019. It’ll also retail for $300, but like anyone still got any cash by this point though? It’s the END OF THE MONTH KANYE! 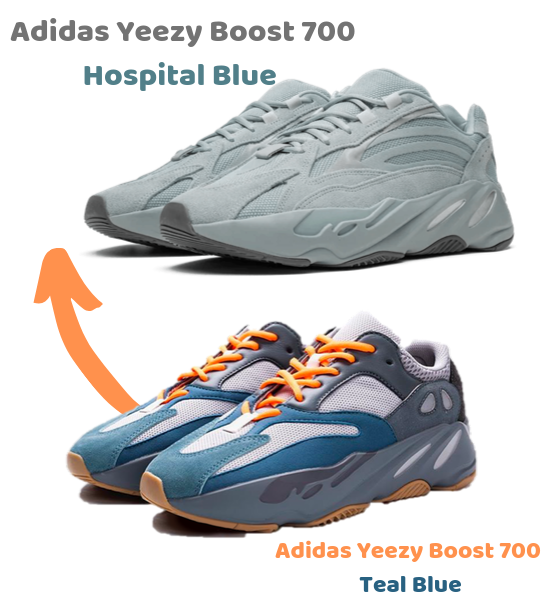 What a way to end the month!
It really has been one crazy year for Yeezys, for real. But like, what a crazy MONTH for the Yeezy 700’s. Just think about it, September alone had 3 new Yeezy releases! That’s insane!
We saw the Adidas Yeezy Boost 700 in Magnet, in Inertia and now in Hospital Blue.
We think Hospital Blue is basically the Yeezy Boost 700 V2 “Inertia” after a long winter with no sunlight. Just very VERY pale.
So, is it just Inertia dressed up as Hospital Blue?

This actually wasn’t the first released colorway of the Yeezy Boost 700 V2 in Hospital Blue. No! It was the complete polar opposite of this pale cold-looking sneakers. And it was first called “Teal Blue” with a dark teal and grey mix colorway. It even had some dope orange shoelaces.
Looks a bit like “Wave Runner”, and a bit like “Magnet”. But we weren’t mad at it! It was actually blue! This was first revealed by the Yeezy Mafia, to later reveal the colorway change.
So we’re thinking it would’ve been better if they stuck to this colorway.
Most 700’s were more earthy kinda toned-down colors, but this was a whole different level.

Where You Can Find Them Yeezys!

But no worries man! If the last Yeezy for September seems like a bust to you, there’s always December!
The Yeezy Boost 350 V3 in “Alien” is coming our way!
Also, you should probably know that this won’t be the last we hear of the 700’s. Just a few days ago Kanye West literally took his unreleased personal Yeezy Boost 700 V3 OFF his feet and gave them to DJ Khaled! Yes, he was seriously walking around in his socks after that.
Those sneakers are out-of-this-world. Full-on like foam-runner meets Yeezy Basketball shoes in outer space vibe.

But, you might need a bot to cop THAT one.