Yeezy 700 Waverunner Vs. Magnet: Which One Do You Prefer?

Since we recently knew about this , we’re all wondering if it’s gonna be worth copping or not. So maybe the best way to actually figure that out is to compare it with the original Yeezy 700 Waverunner. One of the most sold, restocked, and known Adidas Yeezy sneakers.

This comparison will be based on the looks of the sneakers, the release, and resale potential to help you decide which of these upcoming 700s to cop next. 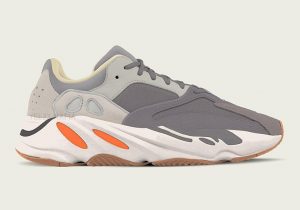 In terms of features, the Yeezy 700 Waverunner and Magnet look very similar. Actually, the Magnets look so similar you’d think they’re knockoff waverunners. Which is not your intention when you go and buy real Yeezys, full-price.

The 2 colorways show grey accents on the uppers, but the Yeezy 700 Waverunner contrasts the Greys with Black and Green-ish suede overlays. more resemblance lies in the orange Ovals on the white midsoles. The finishing, however, is different with the gum outsoles holding the boost material in the Magnet version while black outsoles finish off the looks of the waverunners.

The Adidas Yeezy 700 Waverunner has restocked a couple of times now. It has even dropped in full family sizes lighting up the controversy about it even more. So some would consider this a Pro since they like to play dress-up along with their kids. Some think this takes away the hype and exclusivity of the shoe.

So the point here goes to the Yeezy 700 Magnet which hasn’t dropped yet, and for now, seems to be dropping in Adult sizes only.

Even though the OGs have dropped a couple of times before, they still hold a fair resale value on the secondary market. And except for the 700 V2 Static, it hasn’t been beaten yet. And we don’t see the Magnet 700s as the pair to take the Waverunners down. Unless resale prices of the OGs drop real low after this upcoming restock on August 17th, 2019. But if you wanna know which sneakers are really worth copping and reselling, read this.

If you still haven’t copped the 700 Waverunners, you should. They’re classics and they’re straight on Yeezys. No mistaking them for anything else. But if you’re looking for a change and feel like joining the Dad shoe party, then maybe the Magnets are what you need in your life now.