Shit’s Getting Hot With the USPS Air Force 1 Experimental!

Nike is never short on scandals, controversies, and lawsuits! But in 2021 shit’s going down, so it seems like Nike’s on every headline out there. Their latest scandal now involves a place we all visit so often as sneakerheads, the United States Postal Service (USPS) and the Air Force 1 Experimental.

So Far so BAD for Nike

So far in 2021, Nike had to deal with 1 scandal, and 1 lawsuit. The first one involved the backdooring of the highly-coveted Jordan 1 Trophy Room. This Jordan 1 colorway was supposed to be one of the biggest sneaker releases of the year. Rather it turned out to be the biggest controversy for Nike and Jordan Brand. The Trophy Rooms, as many sneakerheads claim were backdoored, with big sneaker resellers getting the unfair advantage of buying multiple pairs first. As you can imagine the community didn’t take such crap too well and Nike had to do and say something about it.

Another big story for Nike that just happened. Recently, Nike sued Brooklyn art collective MSCHF over a very controversial pair of Nike Air Max 97, aka “Satan Shoes”. “MSCHF and its unauthorized Satan Shoes are likely to cause confusion and dilution and create an erroneous association between MSCHF’s products and Nike,” Nike stated in the lawsuit.

So what’s up with Nike now?

It looks like the USPS isn’t that thrilled or flattered by Nike’s new Air Force 1 Experimental colorway. A colorway that is inspired by the postal service.

On April 1st, the USPS released a statement slamming Nike for its unauthorized use of its intellectual property.

How Does the Nike USPS Air Force 1 Experimental Look? 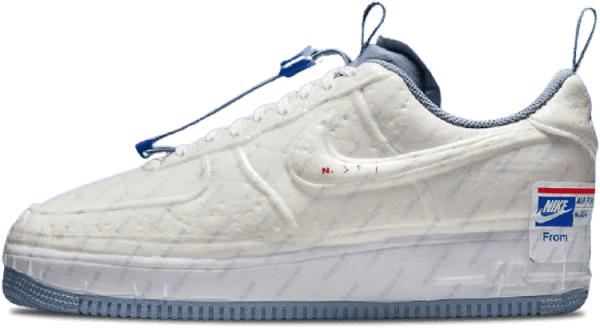 Although you can’t really spot an actual USPS logo anywhere on the shoe, it just SCREAMS post office! The heel of this Air Force 1 Experimental features a label that looks so much like USPS’ Priority Mail labeling. In addition, the midsole and laces are white, contrasting the pale blues appearing on the tongue and lining. More not-so-subtle hints at the inspiration behind this shoe include darker shades of blues taken straight from the USPS logo.

We were expecting a summer release for the kicks but this might change. Depending on the next action taken by the USPS, the Nike AF1 Experimental might not see the day of light. OFFICIALLY! But if you’re into that sort of mess and clash, the USPS Nike Air Force 1 Experimental, you can find some pairs on StockX. But beware, you’ll need to pay a shitload of cash for such an exclusive pair. it’s kinda understandable, all this beef is worth $500+! In other news, Jordan 4 University Blue is dropping soon! Don’t miss out on that drop fam, you’ll feel like a celebrity in them.